Costa Ricans Can Travel To 125 Countries Without Requiring A Visa

QCOSTARICA – Worldwide, Costa Rica ranks 27th among the nations whose people have the opportunity to travel to more countries without restrictions.

According to the Visa Restrictions Index by Henley & Partners, in cooperation with the International Air Transport Association (IATA), which maintains the world’s largest database of travel information, Ticos can travel to 125 counties without requiring a visa.

In the Americas, US citizens topped the list, followed by Canada in second place. The other countries by ranking:

The Index was created with data in force in May 2014 covering 219 destinations worldwide, including countries and territories.

The European Union
Latin American countries as tourists can now enter the Schengen area (which for immigration purposes functions as a single state) and stay for 90 days and in some cases by more are: Argentina, Brasil, Chile, Costa Rica, El Salvador, Guatemala, Honduras, México, Nicaragua, Panamá, Paraguay, Uruguay, Venezuela. 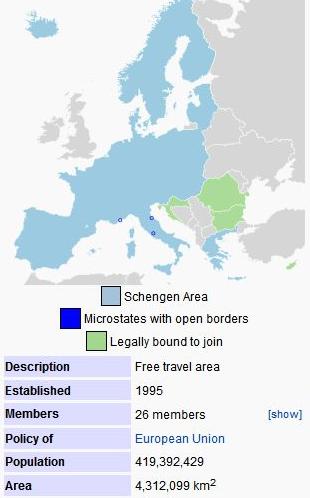 About the future inclusion of Colombia and Peru, the European Parliament said in 2014 that “it has been agreed with the condition that the Commission make a further evaluation of the situation in both countries.”

The Schengen countries include:

* denotes countries outside the European Union.

Costa Ricans wanting to travel to the Schengen area must apply at the embassy of country of entry, ie. Italy, Spain, etc.

There are some types of visas that do not require a visit to the embassy in person, such as the electronic authentication of the Egypt tourist visa. It is expected that online visa processing will increase in the future.

To the United States

United States is one of the countries most Latin American demand a visitor visa. With the agreement came into force in March 2014, Chileans who have biometric passports and have previously completed the Electronic System for Travel Authorization (Electronic System for Travel Authorization, ESTA) can enter the US with no visitor visas for non-immigrants.

To enter the Visa Waiver Program (VWP) countries must meet a number of requirements including:

The Visa Waiver Program (VWP) enables nationals of 38 participating countries to travel to the United States for tourism or business for stays of 90 days or less without requiring a visa:

- Advertisement -
Paying the bills
Previous articleCloud of Bottles To Promote Conservation
Next articleThe Power Of The “Imperial”!