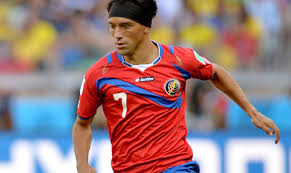 A key midfielder for Costa Rica’s national team, Christian Bolaños, suffered a lower-leg fracture over the weekend that has cast doubt on his availability for this summer’s World Cup in Russia.

The 33-year-old, who was a key player during the Ticos’ successful World Cup qualifying campaign, underwent a type of surgery known as ankle osteosynthesis on Monday and is expected to need between six and eight weeks to recover.

Saprissa said it would provide the Costa Rican national team’s doctors with detailed updates on the player’s recovery process.

Bolaños sustained the injury on Sunday on a hard tackle during a game between Saprissa and Herediano on Matchday 16 of the Costa Rican league.

The player will miss the remainder of Saprissa’s season, which will end in May.

“The pain was severe and I couldn’t continue. Unfortunately the injury comes at a time that I was feeling quite good and getting my rhythm. But that’s part of soccer,” the player told Costa Rican television station Canal 7.

Bolaños was a member of the Costa Rican squads that competed in World Cups in Germany in 2006 and Brazil four years ago and is one of the few players with a chance to compete for a third time in soccer’s showcase event.

He was one of the biggest standouts during the qualification stage due to his generalship in midfield, his skill in creating goal-scoring chances and his ability to attack down both sides of the field.

Costa Rica has been drawn in Group E at the 2018 World Cup and will play its opening match against Serbia on June 17, followed by games on June 22 and June 27 against Brazil and Switzerland, respectively.