The Partido Accion Cuidadana (PAC) of the President-elect may not have completely lost the aid of the Evangelical Alliance-backed Renovacion Costarricense party. Despite Renovacion backing away from an outright alliance with PAC on on May 1, they may help pass a bill removing the Catholic Church as the official religion of the nation. 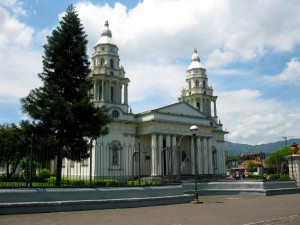 PAC, probably the most socially liberal party in the election, lost Renovacion’s support over the abortion and gay marriage issues, but they have the full backing of the Evangelicals in separating church and state.

The measure lost during the 2006-10 congressional term for lack of political will and the deputies wouldn’t even touch it during the 2010-14 session just ended. But PAC, long supporting the issue, is now in the drivers seat, at least for a year, with the presidency not only of the nation but of the Legislative Assembly.

PAC’s Henry Mora, congressional president, guaranteed Renovacion that his delegation would not oppose such a bill. The Evangelical Abelino Esquivel, RC deputy said his party is ready to push forward a bill to guarantee religious freedom, although that is in the Consitution already.

The Social Christians and Broad Front deputies, as per their alliance with PAC, have indicated they also would not block a separation bill, according to Mora. Esquivel noted that when the constitution was written only 1% of the population were non-Catholics.

The bar is high for both issues. A change in the constitution requires a vote of at least 38 deputies of the 57. Esquivel underscored that he was not proposing removing God from the document. “Because of that, we have to plan the bill carefully,” he said.

QCOSTARICA - President Carlos Alvarado said he has all the confidence in his Minister of Public Works and Transport (MOPT, Rodolfo Méndez Mata, and...
Guanacaste