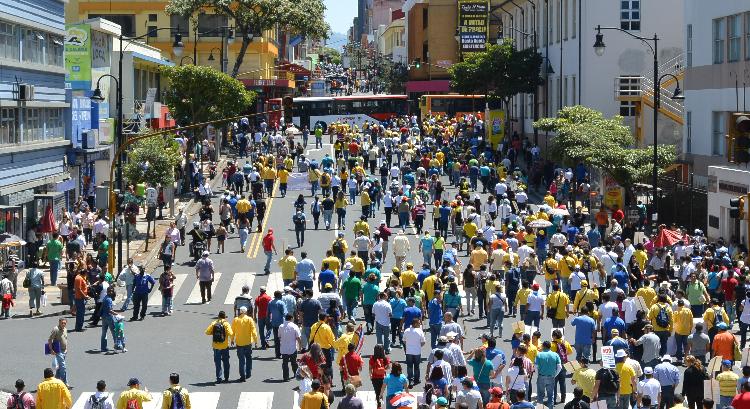 Although the tone of Tuesday’s march was to protest the decreed wage increase 0.43% for the public sector, the message, however, also directed a the future government.

The public sector unions are demanding that future government of either Johnny Araya (PLN) or Luis Guillermo Solis (PAC) who head into a run-off election on April 6,  to define a new wage formula for the public sector. This after failed attempts between the unions and the current government of Laura Chinchilla.

The protest march motivated by educators, public officials and workers of the Instituto Costarricense de Electricidad (ICE) that paralyzed San José and a number of smaller communities, is a warning for the future authorities. 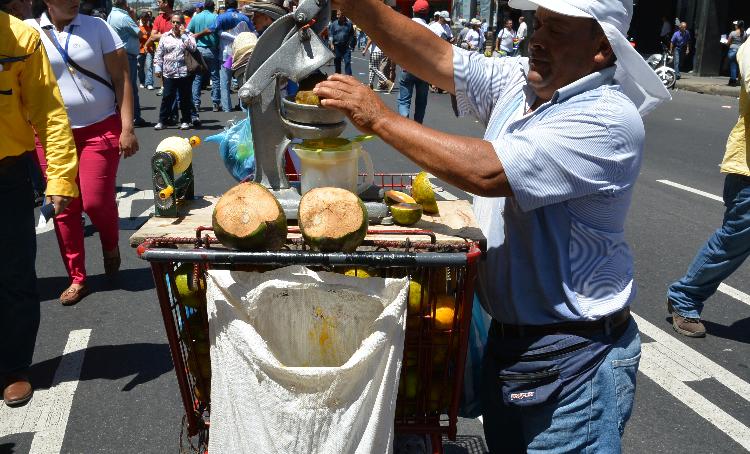 The real winners Tuesday were the street vendors, hawking hats, horns and refreshments, all for “todo a mil” (for a thousand colones).

“La Mancha Amarilla (yellow stain) is not going away”, could be heard over the megaphones as a wave of ICE workers (wearing yellow shirts) moved along Paseo Colon and onto Avenida Segunda, meeting up with teachers and other public sector workers at the Parque Central, moving together one block east where they gathered to protest in front of the Ministerio de Hacienda (Ministry of Finance).

Ana Doris Gonzalez,  of the National Association of Secondary School Teachers (APSE), voiced the opinion of all protestors, “we criticize the presidential decree of a 0.43% wage increase for the public sector,  but also insist that you have to negotiate a new wage formula”.

Segura assures that the unions walked away from the negotiating table and called the strike. “It is very clear they have other interests”, said Segura.

Gilberto Cascante, leader of the Asociación Nacional de Educadores (ANDE) – teachers union – said, “we are willing to negotiate with the government, but to make us a proposal”.

Although the Unión Nacional de Empleados de la Caja (Undeca) – the union for workers of the Caja Costarricense de Seguro Social (CCSS) – social security – did not join Tuesday’s protest march, the union announced its members will take to the streets in the coming days.

Both presidential candidates have said publicly the need to negotiate with the unions.

“I am consenting to discuss the wage formula, but we must also speak of a law for public employment. I am concerned that this type of movement (protest march) is intended to influence the electoral process…”, said PLN candidate Johnny Araya.

PAC candidate Luis Guillermo Solis, also rejected the strike and called for discussion. “The party’s economic team is seeking a a different formula for calculating salary increase for the public sector. There are fiscal constraints that cannot be avoided. The problem cannot be solved immediately or with demonstrations”, said Solis.

Despite criticism from the executive branch against the strike, unions announced another demonstration against the Chinchilla government, on March 20.

Shortly after lunchtime, when the midday heat hit the asphalt, many of the public sector employees started to make their way home.

- Advertisement -
Paying the bills
Previous articleINS Corrects “OOPS!” Against Johnny Araya
Next articleApple and Samsung vs. The Rest