Apple and Samsung vs. The Rest 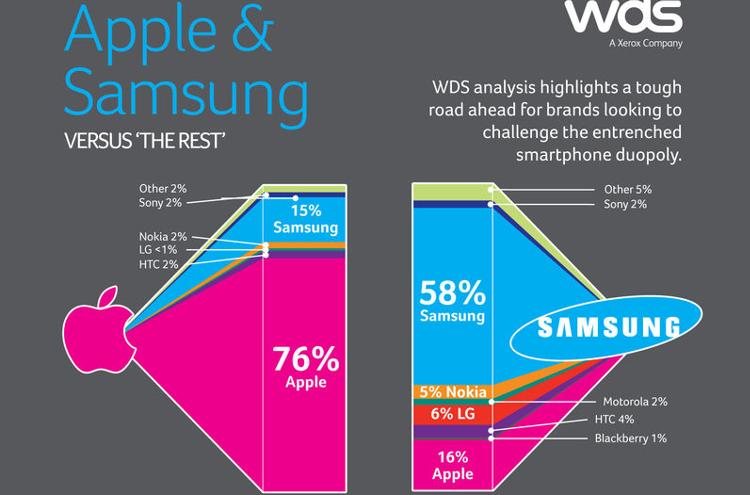 (BUSINESS WIRE) – Despite ground-breaking features and super-slick marketing, smartphones launching at Mobile World Congress this week have a difficult task ahead if they are to break the Apple and Samsung duopoly.

Analysis into brand retention across smartphone manufacturers by WDS , A Xerox Company , shows that 76% of Apple customers replace their iPhone with another iPhone, while 34% of all consumers switching device brands choose Samsung.

WDS, a specialist in customer care solutions for the mobile industry, conducted more than 3000 interviews with smartphone owners in three flagship smartphone markets; the U.S., UK and Australia. The data forms part of the company’s annual WDS Mobile Loyalty Audit, a global study of loyalty in the mobile industry.

“For smartphone manufacturers, brand retention is one of the most important metrics to track. It’s a very solid indication of how successful their device upgrade cycles have been in retaining customers,” explains Tim Deluca-Smith, vice president of Marketing at WDS, A Xerox Company. “Both Apple and Samsung are doing very well in keeping customers excited and loyal to their product roadmaps.”

“This metric speaks a lot to the marketing might of Samsung. The company has been very successful in developing solid relationships with almost every mobile operator on the planet and then building devices to a variety of price-points. This exposes the Samsung portfolio to an enormous base of potential customers,” explains Deluca-Smith. “Combined with a strong brand retention rate, this positions Samsung well for 2014.”

The smartphone brand retention and migration data forms part of the WDS Mobile Loyalty Audit 2014. The full report is based on more than 4000 consumer interviews (conducted in January 2014) from the UK, U.S., South Africa and Australia.

TODAY NICARAGUA – Despite international pressure and rejection, Nicaragua President Daniel Ortega continues to imprison Nicaraguans who criticize and question the way he is...
Redaqted

QCOSTARICA - A Costa Rican tried to enter the country through the Juan Santamaría International - San Jose Airport - with US$153,244 (the equivalent...
Front Page

QCOSTARICA - The value of Costa Rica exports increased by 23% in the first five months of the year, being the highest growth in...
Pura Vida

TODAY COSTA RICA - Original text published in La Nacion on June 23, 1971 - A conflict over air routes, has been unleashed between...
Consumption

QCOSTARICA - Changes in consumption habits in terms of times, types of preparation and specialties challenge the coffee sector. Most of the consumers in Costa...
Sports