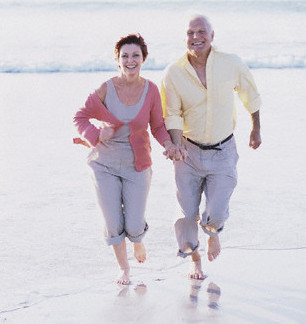 Many baby boomers are health conscious and into running. The benefits which an individual can get from running on a regular basis have been touted in many publications and studies. There are some runners who run just for the joy of running but there are others including many seniors who run because they realize there are a great deal of benefits which can be gained from running.

Some of of them may include reducing stress, improved bone health, improved cardiovascular health, reducing stress and improved mood and better coordination. Running is also an excellent form of exercise for losing weight because it requires a great deal of energy. In order to lose one pound of body weight, the body must create a calorie deficit of 3500 calories. This is equal to burning 500 calories per day. Most runners can easily burn off this many calories in less than one hour of exercise. I used to be a dedicated runner but unfortunately had to give it up because of knee problems. What I do now is walk at least one hour or more a day.

Costa Rica has a lot to offer runners and joggers. Beautiful beaches where one can jog along the sand and enjoy the refreshing ocean air. Parks like the Sabana in San José which is perfect for running. Almost every day the park is filled with runners and walkers. I know several Americans who live nearby and go to the park at least four times a week to get their exercise.

Costa Rica’s hills and mountains are also good places to run and hike. Serious runners will be glad to know that every February there is a race to the top Costa Rica’s highest peak, Chirripó. Hundreds of competitors arrive from all over the world to race 34-km up and down the country’s highest mountain. To give you a little perspective on this race: Chirripó is 3820 meters or 12,532 feet high. The race begins at the village of San Gerardo de Rivas which is about 4500 feet above sea level and finishes at about an elevation 8,000 feet. The fastest runners cover the distance in just over 3 hours! A regular hike of the same distance can take up to 8 hours.

Every year several marathons and half-marathons are held in Costa Rica where serious runners can also compete. You can find more about Costa Rica’s marathons at: http://marathoncostarica.com/bienvenidos/index.php.

One interesting race that is held in Costa is similar to the famous 86-story and 1576 stair “Umpire State Run-up”. The record for this race is 9 minutes and 33 seconds. Since we don’t have any buildings in Costa Rica that come close to that height we have a lesser version of the famous New York event called the “Carrerón del Escalón” or “Race of the Step” in English. It is held at the main office of the Caja Costarricense del Seguro Social (Social Security Building) in downtown San José and only open to employees and a few select participants. The building is only 13 stories high so it is not that grueling of an event.

Senior runners will be please to know that there are several stores that specialize in quality running shoes in the San José area. New Balances has one store in the Multiplaza Mall in Escazú and another in the Paseo de las Flores Mall in Heredia. There is also a store that specializes in running shoes called Runners, which is one block east of the Palacio de Deportes sports arena in the city of Heredia. You can order running shoes on line and have them shipped to Costa Rica by using one of the country’s private mail services like Aerocasillas. The only problem is that you cannot try on the shoes if your order them this way. However, if you know your exact shoe size and fit then this won’t pose a problem.

Bruce Silverman, a lifetime runner who used to live in Costa Rica, recently founded an on-line running magazine called ”Senior Runner.” It has a wealth of interesting information and tips for older runners. Check it out http://www.seniorrunner.com.

QCOSTARICA - Given the reduction in the influx of...
Pura Vida