Why Costa Rica’s Taxis Are Red 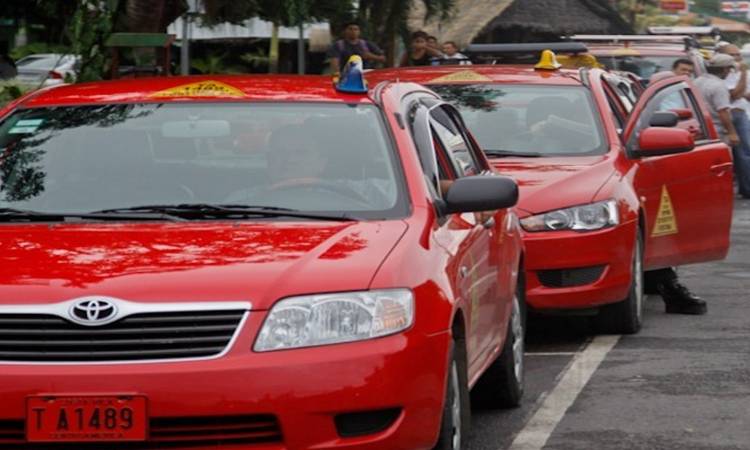 The taxis are collectively referred to the “Fuerza Roja” (Red Force) for their ability to unify in times of crisis or emergencies.

Wherever you go in Costa Rica, from Guanacaste to San Jose and from Playa Jaco to Puerto Viejo in the Southern Caribbean region of Limón, you are bound to see the iconic red taxicabs.

They are likely to be four-door Hyundai Accents or Toyota Corollas, with occasional 4×4 SUVs in rural areas and vans in tourist hotspots. The exceptions to the red rule are the orange taxis at the airport, the organized porteadores and the informal pirate cabs.

The short answer to the question posited in this article is that Law Number 7969 requires taxis to be painted red. The law also requires, among other things, that taxis be further identified by three yellow triangles: one on the driver’s side door, another one on the front passenger side door and one on the roof. These yellow triangles have the license plate number and the region the taxicabs are authorized to offer their services. Taxis in Costa Rica must also have a roof sign that lights up at night.

It is important to note that the yellow triangles on Costa Rica’s taxis pay homage to the color used in other parts of the world, including Athens, Barcelona, Bogota, Bombay, Buenos Aires, Damascus, Istanbul, New York City, Panama, and many others. A recent article in online magazine Slate notes that the iconic New York City cabs were made officially yellow in 1967, but yellow fleets existed in other cities since 1909. 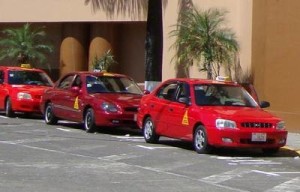 The first NYC cabs were manufactured in France, and they arrived in Manhattan painted red and green. In Costa Rica, informal cabs started operating in the 1950s, until Noe and Jorge Alfaro (founders of one of the most powerful taxicab coops in San Jose) imported 40 Renault 4CV taxicabs from France. According to Oscar Zaldivar Rivera’s “History of Taxis in Costa Rica,” these taxis were painted red and arrived with a taximeter, which is now known as the infamous “Maria.”

Although there were red and green French-manufactured cabs roaming around in NYC, yellow would arrive when:

In 1915, Chicago entrepreneur John Hertz (of future rental-car-company fame) opened the first Yellow Cab Company in his city. To unify his fleet, Hertz had commissioned a local university study to “scientifically ascertain which color would stand out strongest at a distance,” per his biographer—and yellow won. (Color researchers still agree that yellow is generally the most visible color, though some have suggested that it’s chartreuse that the eye most easily detects.)

The Hertz logo is unmistakably yellow, but this color had also been used by the Thurn und Taxis German family that pioneered commercial postal and transport services in Europe in the 16th century; their family coat of arms prominently featured the colors yellow and red. The taximeter is also a German invention, but horse-drawn “taxi” services were pioneered in London and Paris.

In Costa Rica, there was never a move to change the colors of the original Renault 4 CV taxicabs, and thus we have kept the red tradition and later added the yellow triangles. There is little uniformity in this regard, however, so these days we can appreciate a run on the magenta spectrum on taxis painted from Cabernet to candy apple red.

- Advertisement -
Paying the bills
Previous article4G In Costa Rica Around The Corner?
Next articleYes to Life, No to Breast Cancer