The problems of failing infrastructure is not limited to San José, residents of Cartago and Heredia are having their share of sinkholes on major routes.

In Cartago, a sinkhole in one of the old capital’s busiest street has become a nightmare for drivers and residents. A 10 metre (30 foot wide) crater appeared, caused by an old storm drain plugged by debris.

The street connects several important points in the downtown area of Cartago. On Thursday, municipal officials scurried to replace the failed drain pipes.

In Heredia, near the MABE plant, south of Paseo de las Flores mall and Pricesmart, on the busiest road in Heredia, a policia de transito official (traffic cop) spotted a hole in the road surface created by a failed storm drain.

The hole detected on Thursday is not a priority, Transport officials have their hands full with more serious problems. For now the hole, not enough yet to cause serious traffic problems, has been marked off for future attention.

Meanwhile back in San José, the closure of the Circunvalación and the failure of the traffic police to control the movement of heavy trucks on the alternate routes is causing a total nightmare for drivers.

Early Thursday morning, a tractor trailer took down four utility posts and damaging three others, causing the complete shut down of Calle Morenos, a major alternate for travel betwee Hatillo and Pavas.

The Compañia de Fuerza y Luz (CNFL) worked around the clock all day to restore power and allow the re-opening of the road, replacing the posts and removing the power lines fallen on the road. The cost of that operation is about ¢21 million colones (in materials alone), says the CNFL, which will be charged to the responsible. For his part the driver of the heavy vehicle says he could not see,given the darkness of the morning (4am) – the low lying cable. Traffic officials concur the presence of low lying cables and absolved the truck driver of any negligence of his part. 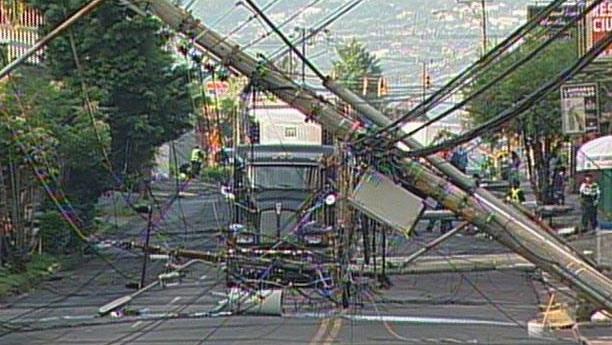 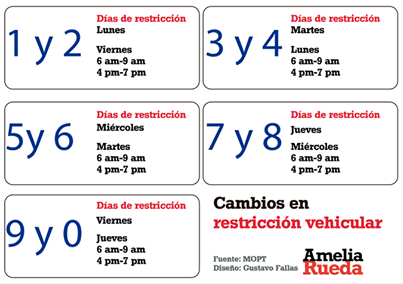 Beginning Monday (September 16), plates ending in 9 and 0 will also be restricted from circulating between 6am and 9am and 4pm and 7pm. On Tuesdays plates ending in 1 an 2,  on Wednesdays 3 and 4,  Thursdays 5 and 6 and Fridays 7 and 8.

Thus, come Monday four plates are restricted, the objective is reduce circulation, at least during peak hours, 40% of the vehicular fleet.

Opponents say that the plan is ill thought-out and will cause additional economic hardship given that there is no “viable” alternate public transportation for drivers being forced to leave their cars at home for two days now instead of one.

Another solution, one that has been stalled for almost five years is the  “intersectoral” bus service.

Under this plan, public service buses would cris-cross sectors, providing

service from one area to another – example, one bus moving from Santa Ana to Escazú to Pavas to La Uruca. Currently, if you are coming from any of the foregoing areas, you have to take a bus to San José and then connect to a bus to the specific area. But Costa Rican politics has been hard at play stalling the start of the service.