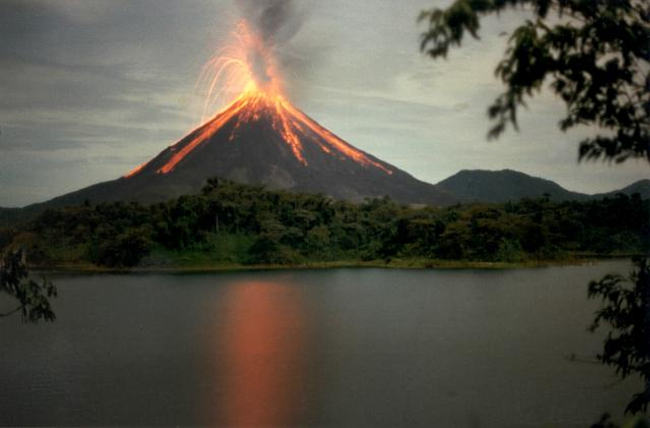 On a clear night, the Arenal Volcano of north central Costa Rica can put on a show that’s hard to match anywhere in the world. Rivers of molten rock cascade down the side of Costa Rica’s most active volcano.

The Arenal area features a number of hotels, resorts and spas, some featuring natural hot springs and rooms where you can sit on the verandah and watch the show (weather permitting, of course).

Southwest of Arenal are more volcanoes. Volcan Poas is probably the easiest to visit from the Capital of San Jose. It features one of the largest volcanic craters in the world, containing a beautiful turquoise lake (not great for swimming, unless you are invulnerable to sulfuric acid). Another much visited volcano is Volcan Irazu, whose 1723 eruption destroyed the country’s capital city, Cartago, and caused the capital to be moved to San Jose. Like Poas, Irazu can be visited in a day trip from San Jose.

Close by is the Turrialba volcano. Although there is no road to the summit, it can be reached by horseback or 4wd vehicles. The area is also a starting point for some excellent river rafting.

All these volcanoes are due to Costa Rica’s location on the Pacific ‘Ring of Fire.’ Movement between the Coco and the North American tectonic plates gives rise to volcanic activity, in addition to being the main source of Costa Rica’s frequent earthquakes. Without this tectonic activity, there would be no earthquakes or volcanic eruptions. There would also be no Costa Rica. The same geological forces that cause the volcanoes and earthquakes are responsible for the land under our feet here, and even for the eternal Spring that San Jose enjoys at 1000 meters (3000+ ft) altitude.

Costa Rica’s great biological diversity owes its existence to the great variation in altitude and climate caused by the eons of volcanic/seismic/tectonic activity. Come see for yourself!

The author lives in the Monte Cielo Gated Community in Puntarenas, in the hills above Pacific Ocean near Jacó.

Phil Taylor, retired building contractor from Chicago Illinois. Phil lives with his wife of 35 years, two mongrel dogs they adopted locally and a parrot named Socrates. Phil enjoys working on his tree house and writing about his adopted country.

QCOSTARICA - An eight-year-old boy who had no risk...
News