Could ‘Skyfall’ Be James Bond’s First Real Shot at the Best-Picture Oscar? 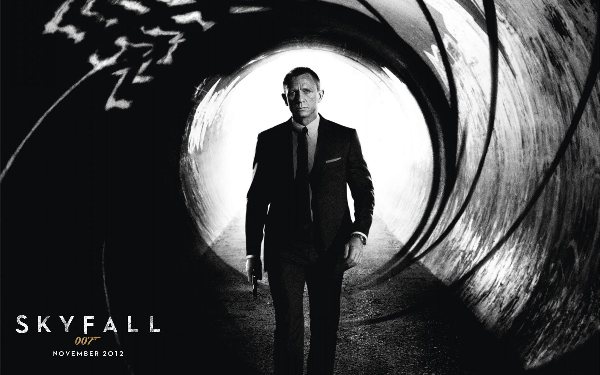 For fans of the Bond canon (and I count myself one), the stakes for the newest installment, Skyfall, are sky high. The film is the third starring Daniel Craig—by any reasonable assessment a better Bond than any since Sean Connery—and as such it possesses a kind of deciding-vote quality over the two that preceded it. The first, Casino Royale, was not merely 007’s sharpest outing in 30-plus years, but a fairly explicit rebuke to the borderline self-parody into which the franchise had sunk; the second, Quantum of Solace—despite another excellent outing by Craig—was a soggy sequel, timid and uninspired.

Thus the question: Was Casino Royale an outlier in the decades-long stretch of Bondian disappointment? Or was Quantum of Solace the outlier in a new, improved Age of Craig?

I’m delighted to report that Skyfall powerfully suggests the latter. The film, directed by Sam Mendes, is among the most ambitious imaginings of Bond to date: dark, supple, and punctuated with moments of unanticipated visual brilliance.

Tough guy shows vulnerable side in latest Bond film, ‘Skyfall’It begins, as these affairs typically do, with a chase. Or perhaps it might better be described as a meta-chase, an early hint that the screenplay (by Neal Purvis, Robert Wade, and John Logan) will cast a knowing eye over the historical expanse of the franchise. A pursuit by car evolves into one by motorcycle before concluding in fisticuffs on the roof of a train. Throw in that it all takes place in Istanbul, and we’ve nearly managed 50 years of Bond in miniature.

Already, however, there are intimations that this will be no mere rehash. M (Judi Dench) orders Bond to abandon a wounded agent, presumably to his death. And for all its backward glances, the opening sequence will end in novel fashion: As a consequence of M’s pitiless efficiency, Bond is shot, fallen, evidently drowning. Cue up Adele’s moody, evocative theme song: This is the end. Hold your breath and count to ten.

Obsolescence and decay hang heavy over all that follows. Has M grown too old? Has Bond? These themes were toyed with in the non-canonical Thunderball remake Never Say Never Again, which saw Connery return to action 12 years (and one broken “never” vow) after Diamonds Are Forever. But if that examination of 007’s mortality was quasi-farce, Skyfall tilts toward tragedy. A cyber-terrorist, someone out of M’s past, has targeted MI-6 itself, and it’s unclear whether Bond—injured, disillusioned, full of drink and pills—is still a man to take on such challenges.

Craig and Dench are again superb, and superb together, as the hardened killer and the one person harder still. It is hardly a surprise that Mendes, who directed American Beauty and Revolutionary Road, has an ear for the strained and prickly marriage between the two. (M: “You know the rules of the game. You’ve been playing it long enough. We both have.” Bond: “Maybe too long.” M: “Speak for yourself.”) 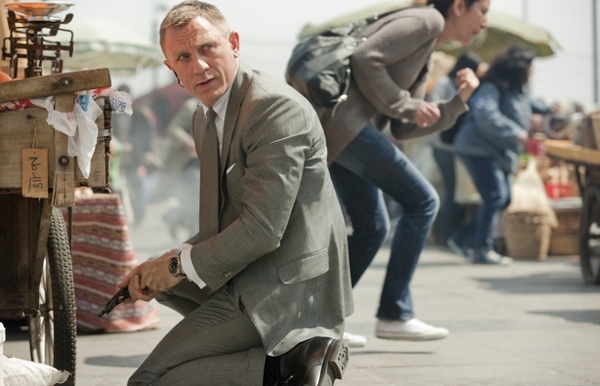 Less expected is Mendes’s eye for elegant venues on a planet Bond had long ago seemed to crisscross into exhaustion: the summit of a glass tower in nighttime Shanghai, with luminous billboard jellyfish blooming in the background; a luxurious gambling den floating off the shore of Macau; a battered and abandoned ghost-city on a forgotten island in the South China Sea.

Like Casino Royale before it, Skyfall is at pains to advertise its breaks from the franchise’s past excesses, as when Bond’s new Q (Ben Whishaw) offers him a meager haul of gadgetry. “A gun and a radio? It’s not exactly Christmas, is it?” grouses Bond. Q’s response is tart: “Were you expecting an exploding pen?” Yet even on this score, the film is not without its sentimental indulgences, as when Bond brings into service an old friend last seen in—no, I won’t spoil it.

There are new friends along the way as well, played by Ralph Fiennes, Naomie Harris, Bérénice Marlohe, and Albert Finney—himself a candidate for the role of Bond once upon a time. Memories are uncovered and past sins revisited. There are nods to Tennyson’s “Ulysses” and to the famously stolen Modigliani Woman with a Fan. And Bond enjoys what is to date his most explicit (and by far most amusing) brush with homoeroticism.

The movie stumbles here and there. Though Javier Bardem has some nice moments as Bond’s new nemesis, he leans a bit heavily on Ledger’s Joker and Hopkins’s Lecter, before the script disappointingly demotes him to a near-generic villainy. And while the closing act provides abundant catnip for Bond nostalgists, it veers a few degrees hokier than necessary.

But make no mistake. Skyfall both honors and revitalizes what has come before, and offers compelling evidence that 007 is indeed back. As Bond himself replies, when asked what hobbies he might have: “Resurrection.”