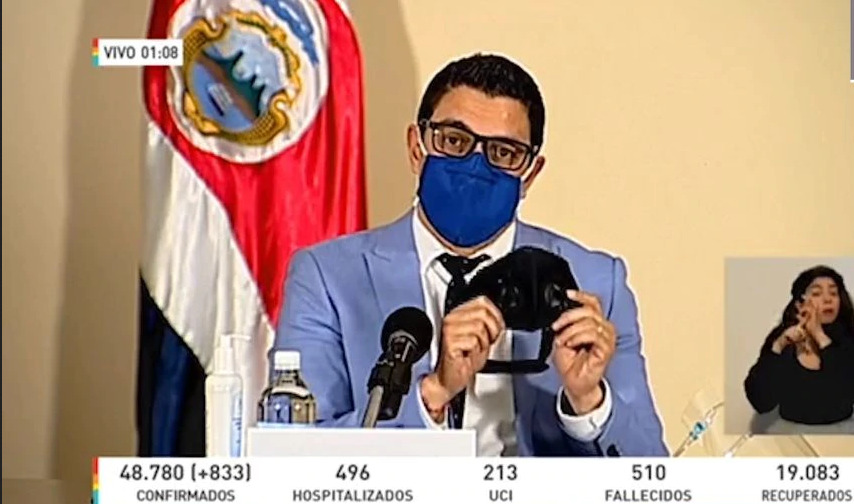 (QCOSTARICA) The Minister of Health, Dr. Daniel Salas, was back at the pulpit this Monday, September 7, 2020, after weeks of absence.

For the first time in weeks, we could feel that we are back on track. Not that the Deputy Minister of Health, Roberto Gonzalez or Medical Director, Priscilla Herrera, are not capable people, Salas’ brand of messaging is what we have been accustomed to from the first day six months ago.

For the second Sunday in a row, there was not Health update, the numbers were provided during Monday’s press conferences from Casa Presidencial.

Dr. Salas took the opportunity to remind us of the correct use of the face mask that will be mandatory starting on Wednesday, September 9.

The good doctor demonstrated what he has seen of late, the completely wrong way to wear a mask: under the chin. He compared it to a mother giving a child a sweater to cover their shoulders from a chill, but wearing it around the waist.

He emphasized the need to completely cover the nose and mouth.

For his part, Dr. Roman Macaya, president of the Caja Costarricense de Seguro Social (CCSS), who took the stage for the first time in many days, explained the start of the clinical trial of the equine antibody developed in conjunction with the Clodormiro Picado Institute of the University of Costa Rica (UCR).

Dr. Macaya explained that 26 patients in four hospitals, the Calderon Guardia, the San Juan de Dios, Mexico and CEACO, will receive the antibody.

Minister Salas acknowledged that although it was possible to recover a trace of the virus, without giving any estimate, it is complicated when each positive case has 10 direct contacts.

This figure, he said, “exceeds any system,” he said.

For this, said Salas, it will be important that the Costa Rican Social Security Fund (CCSS) to notify the health order.

Dr. Macaya explained that the notifications will be made through the Caja’s Unique Digital Health Record (Edus), can generate the health order at the medical center for a person with symptoms, suspected or confirmed with COVID-19.

He added that the patient will be given the option of receiving the notification by email or having it printed right at the clinic. In either case, they are given personal notice of the order as required to be valid before the law.

“The document has a unique number to verify the authenticity of the health order with which the person can confirm, and if they have doubt, they can call 1322 for any questions regarding the orders notified by the Caja, although they are issued by health,” Macaya specified.

- Advertisement -
Paying the bills
Previous articleHow do you find your way around with street names or numbered addresses?
Next articleResidents can now enter Costa Rica without being current with their Caja payments