Malls and retails stores to open on weekends, beaches will stay opening to 9:30 am including weekends, vehicular restrictions remain unchanged

(QCOSTARICA) Two before most of the country enters a new phase of reopening of activities and businesses, 68 more cases of COVID-19 are reported.

The accumulated number of infections from March to June 18 reached 1,939, reported the Health Minister, Daniel Salas. There are 864 women and 1075 men, of whom 1412 are Costa Rican and 488 foreigners, 39 people are in nationality investigation.

There are 937 recovered, 38 more than the previous day and 25 people hospitalized, three of them in the Intensive Care Unit (ICU).

According to the schedule established in May, Salas confirmed that as of this Saturday, a series of activities are reactivated and others that were already working are extended in hours or days.

Specifically, these are the changes:

None of the opening measures will be applied to orange alert zones due to the high circulation of the virus produced by COVID-19. They are:

Minister Salas said that, despite the fact that in the initial plan given in May the opening of bars at 50% of capacity was contemplated at this time, they decided not to do so. 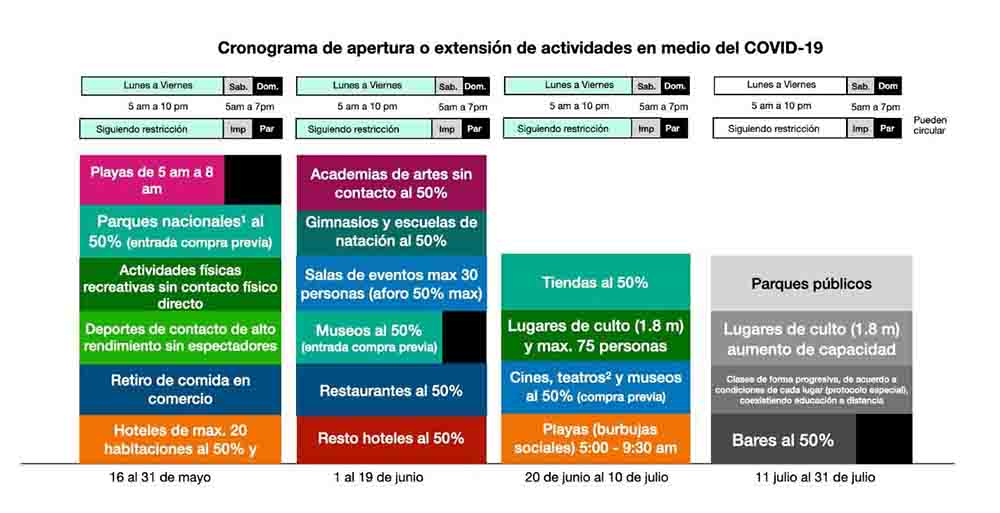 “While there is no community transmission, we are in the midst of an increase in cases in a second pandemic wave. It is also being taken into account that bars represent a riskier activity, because many people lose the notion of being in a pandemic. We are taking it for later, possibly for the next phase,” he explained.

He was very emphatic, in addition, that international tourism will not be enabled until they have a health protocol that meets “the stringent measures for the population.”

The last extension of the border restrictions was to June 30, no new date was mentioned on Thursday.

“It would be in a gradual, controlled way, with traceability of the people who enter. We would not be enabling the entry of tourists (from countries) with very strong transmission. We have been making progress with Civil Aviation, Immigration, the Ministry of Transport, the Costa Rican Tourism Institute, the Ministry of Health and other entities in the best measures we can apply,” he said.

It is necessary to define, for example, tests to enter the country and what that test would be, in addition to checking vital signs. “All with the idea that this opening is a responsible health act of the highest level.”

- Advertisement -
Paying the bills
Previous articleUCR: COVID-19 second wave “pico” could occur within a week
Next articleWill COVID-19 testing be a key requirement for international flights?