Cuba Condemns Politicization of Migration Issue by the United States 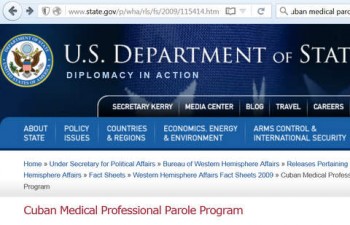 Q24N (ACN) The Cuban government reiterated on Tuesday its condemnation of the politicization of the migration issue by the United States and called for legal, safe and orderly emigration.

Cuban citizens are victims of the US Cuban Adjustment Act and particularly of the so-called Dry Feet-Wet Feet policy, which gives Cubans a favorable treatment as emigrants to the US, reads a statement by the Cuban Foreign Ministry.

The statement recalls that over the past few days, a complex situation was created following the arrival in Costa Rica of over one thousand Cuban citizens coming from other countries of the area with the aim of traveling to the U.S.

Those persons left Cuba legally to different Latin American nations, but in the attempt to reach US territory they have become the victims of human traffickers and criminal gangs, which unscrupulously profit from their control of the flow of these persons through South, Central America and Mexico.

The statement notes that the Cuban authorities have permanently kept in contact with the governments of the countries involved in the event in order to find a fast and appropriate solution, considering the wellbeing of the Cuban citizens.

The Cuban Foreign Ministry stresses that these citizens are the victims of the politicization of the migration issue by the US government, the Cuban Adjustment Act and in particularly by the dry feet-wet feet policy, which encourage irregular migration from Cuba to the U.S. in violation of the current migration accords.

The Cuban ministry also denounces that the US administration maintains the so-called Parole for Cuban Medical Professionals, adopted in 2006 by the Bush administration to encourage doctors and other medical personnel to abandon their missions in third countries and migrate to the U.S.

The statement reads that the Cuban citizens that have legally left the country and meet the requirements of the current migration law have the right to return to Cuba if they want to do so, and affirms the commitment of the Cuban government to a legal, safe and orderly migration.