Cuba Has a Vaccine Against Lung Cancer

(CNN) On what appears to be a residential street on the outskirts of Havana, the tan building with a guard gate seems out of place.

Sliding glass doors lead to a modern-looking lobby with a single receptionist desk, some furniture, and a timeline boasting the center’s achievements. A quote from Fidel Castro is emblazoned on the wall. This facility was his idea, after all — and Cuba would need it.

Watch the video: Make the rounds with a family doctor through the streets of Havana’s neighborhoods and visit the lab where researchers created a lung cancer vaccine, sparking interest in the United States.

With much of the medical and pharmaceutical technology and treatments coming from the United States, Castro’s country wouldn’t have access to it due to an American embargo in place since the early 1960s.

Cuba would have to make its own technologies and much of this has happened here, at the CIM.

In the building next to the lobby, researcher Camilo Rodriguez opens the door to a laboratory. Men and women are busy working inside, pipetting liquids into trays and putting tubes in whirling centrifuge machines. Since this place began operating in 1980, it has delivered some serious science.

Rodriguez says Cuba has produced more than 70% of the medication needed in the country and produced their own vaccines for 21 different diseases. 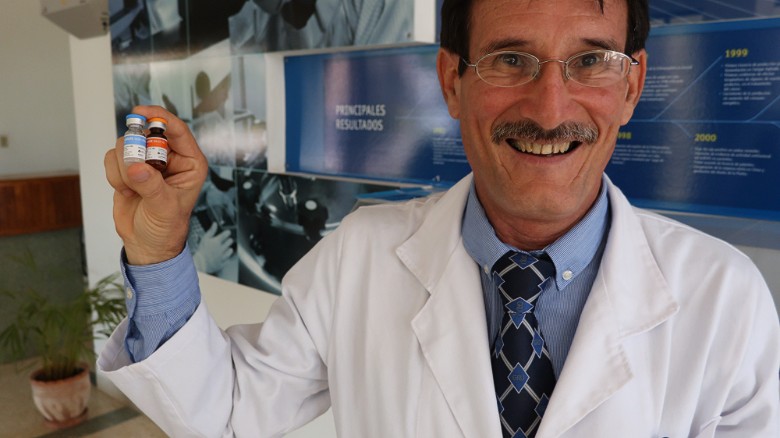 Scientists at the Centro de Immunologia Molecular, the Center for Molecular Immunology (CIM), have created a vaccine to treat lung cancer. This has caught the attention of several countries around the world, including the US. Pictured, researcher Camilo Rodriguez with vials of the vaccine.

The island, the largest in the Caribbean, has a state-run health system. This is the only type allowed here. Much of the focus is on prevention; after all, it is typically much cheaper to prevent a disease than treat it. The care, including vaccines, is free. 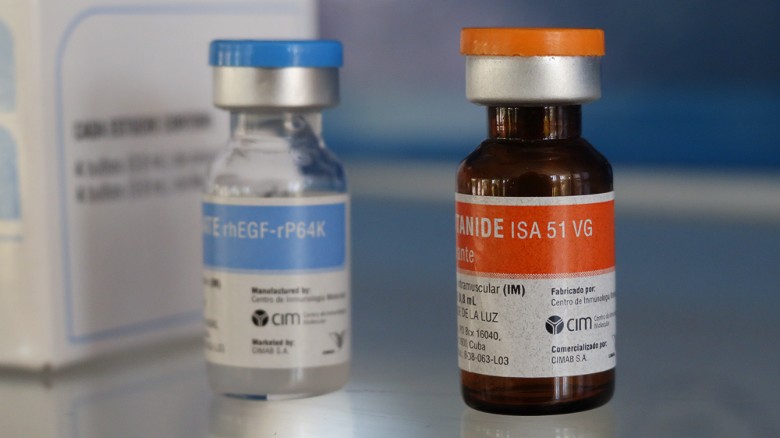 The vaccine is called CIMAvax, and clinical trials have shown it can prolong life by an average of 11 months in lung cancer patients.

But there is one vaccine, conceptualized and created here at CIM, which has caught the attention of several countries around the world, including the United States. A vaccine for lung cancer.

“Lung cancer is the third cause of disease by cancer here in Cuba,” Rodriguez says, sitting the in lab. “We have 4500 lung cancer patients each year. And in that same period of time, the same amount of patients die from this cause.”

Cancer, of any form, is the second leading cause of death in Cuba. Among men, the most common types of cancer seen are lung and prostate cancer. Lung cancer has become particularly prevalent in large part thanks to one of the country’s staples — tobacco. Or more specifically, cigars. 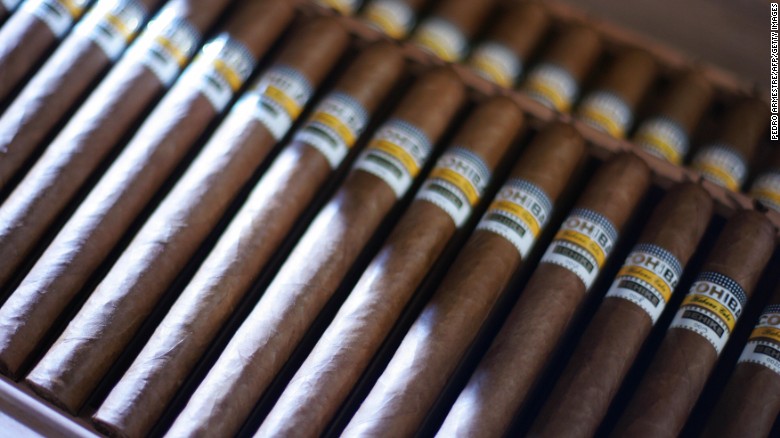 Cuba’s tobacco industry resulted in another staple the country is known for — cigars. Pictured, a box of the world’s most expensive cigars, Cuban Cohiba Behike cigar.

Orelve Alberto Sanchez Leal is 77 years old and was a smoker all his life, starting at age seven. He says he smoked as much as a box of cigars every day. In 2007, he was diagnosed with lung cancer.

After trying chemotherapy and radiation, his doctor had one more suggestion — a clinical trial for a vaccine that could help extend his life. 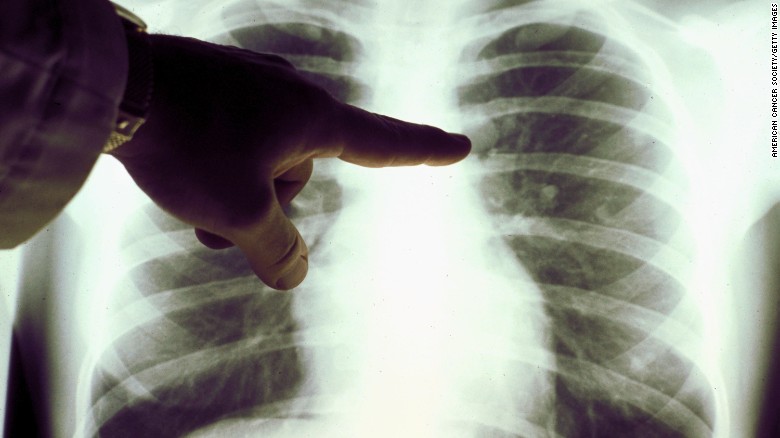 Among men in Cuba, lung and prostate cancer are the most common types of cancer reported. Cancer in any form is the second leading cause of death in the country. Pictured, a scan showing the lung of a patient with lung cancer.

It is called CIMAvax, and while CIM calls it a vaccine, it is important to note the drug does not prevent disease like a traditional vaccine, at least in its current form. It instead keeps diagnosed tumors in check by inhibiting their growth, acting more as a treatment. This is known as a therapeutic vaccine.

Rather than target the cancer cells directly, the vaccine acts as a form of immunotherapy, harnessing the body’s own immune system to fight the cancer instead. 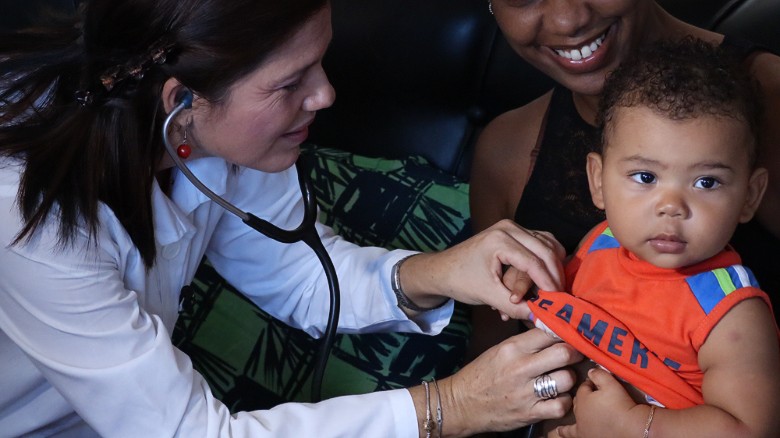 Cubans have a slightly longer lifespan, on average, than the United States at 80 years versus 79 years, respectively. The island nation are thriving in the field biotechnology, which led to development of the vaccine.

Other countries are participating in clinical trials for CIMAvax, including Japan and some in Europe. The United States is also interested. As the two countries continue to normalize relations after half a century of dispute, FDA clinical trials could start this year and will run in partnership with the Roswell Park Cancer Institute in Buffalo, New York.

A range of clinical trials have enabled the vaccine to be tested in 5000 patients worldwide, including 1000 in Cuba. In one small trial, patients younger than 60 lived on average 11 months longer than those who did not receive the vaccination.

But Orelve Leal is an exceptional case. It has been 9 years since he was diagnosed. 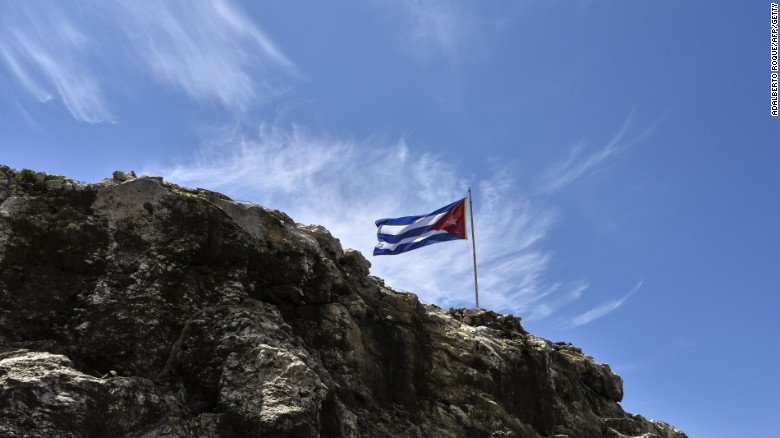 Cuba, the largest island in the Caribbean, has a state-run health system. Much of the focus is on prevention as it is cheaper to prevent disease than treat it. The care, including vaccines, is free.

“That disease is a tough blow for anyone,” he says. “Because what one usually thinks when we are told that we have cancer is that you’re dead. However, I’m here.”

As he talks, his eyes are shiny with unshed tears. It is an emotional topic for him.
“I have to get emotional,” he says. “I have lived 9 years with his disease, and I don’t plan on dying from it.”

9.3% Of All Deaths In Costa Rica Related to Cigarette Smoking: Ministry of Health

Q COSTA RICA / The collection of tax on Tobacco does...
Read more

QCOSTARICA - After almost three years of starting the work and four before that to the get contract awarded, authorities of the governments of...
Heredia

QCOSTARICA - Despite losing their home entirely in December, a Heredia received electricity bills from the Heredia Public Service Company (ESPH) for January and...
World

Q REPORTS - The former leader of the Soviet Union and 1990 Nobel Peace Prize winner, Mikhail Gorbachev, who has been self-isolating to protect...
Costarica History

QCOSTARICA - This year Costa Rica celebrates 200 years of independent life. And the road to commemorate the 200th has begun with the launch...
Today Costa Rica

TODAY COSTA RICA - Before the Office of the Comptroller General (CGR), the rate agreed by the Municipality of the canton of San Carlos...
Fuel Prices

QCOSTARICA - At 12:01 am this Wednesday, fuels will be more expensive, as the third price hike of the year takes effect. The increase in...
Politics