In an interview published in the state daily Granma Sunday, the adviser to the president of the Cuban National Association of Economists and Accountants (ANEC) said the system distorted the real cost of production, and led to undervalued exports and overvalued imports.

“Monetary and exchange rate unification is a strategic and urgent decision,” said Infante. 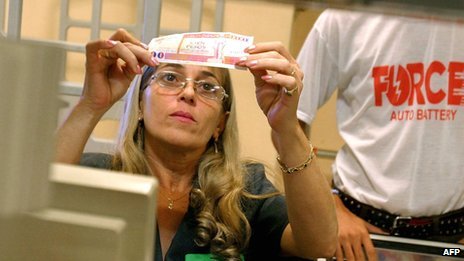 “Getting rid of the dual system will not only improve indicators such as true value of production and profitability, but also take the workers into account in a more conscious way, as they will know the true value of their input,” said the adviser.

The adviser added the impact of the reform would be felt immediately by the public, but they would not see its immediate benefits, because the elimination of the dual currency alone was not enough to boost consumer purchasing power. That can only be realized through increased productivity, said the adviser.

In October 2013, Cuba said it would phase out the dual currency system, which has caused a growing wealth gap between Cubans with access to dollars and those without.

The dual-currency system, which came into being in the 1990s to cushion the blow of the economic crisis sparked by the fall of the former Soviet Union, had helped Cuba survive the U.S.-led economic blockade.

Under the system the cheaper Cuban peso (CUP) circulates alongside the more valuable Cuban Convertible Peso (CUC), with most Cubans earning CUP, while the vast majority of goods priced in CUC.

QCOSTARICA - For years, Tilarán has seen the transit of tourists heading towards Lake Arenal, the homonymous volcano and La Fortuna or towards Monteverde. At...
Politics