Dengue Cases Quadruple In First Three Months of The Year

The number of cases of Dengue in the first quarter of the year over has quadrupled over the same period in 2012 and 2011. In the first ten weeks of the year, the Caja Costarricense del Seguro Social (CCSS) reports more than 6.000 cases.

Catalina Ramírez, head of the Enfermedades Eemergentes y Eeemergentes de la subárea de Vigilancia Epidemiológica (Emerging Infectious Diseases of the Epidemiological Surveillance) at the CCSS, explained that the current rate is the highest seen in the last decade.

Another concern for Ramírez is that the growth is occurring in the dry season when rainfall intensity is very low, a situation that could worsen with the arrival of the rainsy season.

Ramírez says that despite the information and prevention measures, the population remains indifferent to the severity of the virus.

Detailed information on Dengue is available at the Centers for Disease Control and Prevention (CDC) website, that includes an interactive map of global dengue activity

Prevention. Avoid getting infected whether at home on travel…
There are no approved vaccines for the dengue virus. Prevention thus depends on control of and protection from the bites of the mosquito that transmits it. The World Health Organization recommends an Integrated Vector Control program consisting of five elements: Advocacy, social mobilization and legislation to ensure that public health bodies and communities are strengthened,  collaboration between the health and other sectors (public and private), an integrated approach to disease control to maximize use of resources, evidence-based decision making to ensure any interventions are targeted appropriately and capacity-building to ensure an adequate response to the local situation.

The primary method of controlling A. aegypti is by eliminating its habitats. This is done by emptying containers of water or by adding insecticides or biological control agents to these areas, although spraying with organophosphate or pyrethroid insecticides is not thought to be effective. Reducing open collections of water through environmental modification is the preferred method of control, given the concerns of negative health effect from insecticides and greater logistical difficulties with control agents. People can prevent mosquito bites by wearing clothing that fully covers the skin, using mosquito netting while resting, and/or the application of insect repellent (DEET being the most effective).

More on the Dengue fever

Dengue fever, also known as breakbone fever, is an infectious tropical disease caused by the dengue virus. Symptoms include fever, headache, muscle and joint pains, and a characteristic skin rash that is similar to measles. In a small proportion of cases the disease develops into the life-threatening dengue hemorrhagic fever, resulting in bleeding, low levels of blood platelets and blood plasma leakage, or into dengue shock syndrome, where dangerously low blood pressure occurs. 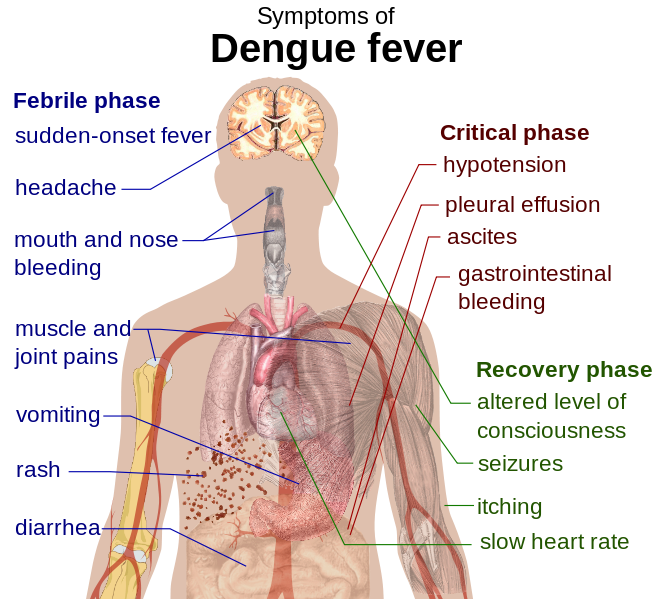 Dengue is transmitted by several species of mosquito within the genus Aedes, principally A. aegypti. The virus has four different types; infection with one type usually gives lifelong immunity to that type, but only short-term immunity to the others. Subsequent infection with a different type increases the risk of severe complications. As there is no commercially available vaccine, prevention is sought by reducing the habitat and the number of mosquitoes and limiting exposure to bites.

Treatment of acute dengue is supportive, using either oral or intravenous rehydration for mild or moderate disease, and intravenous fluids and blood transfusion for more severe cases. The incidence of dengue fever has increased dramatically since the 1960s, with around 50–100 million people infected yearly. Early descriptions of the condition date from 1779, and its viral cause and the transmission were elucidated in the early 20th century. Dengue has become a global problem since the Second World War and is endemic in more than 110 countries. Apart from eliminating the mosquitoes, work is ongoing on a vaccine, as well as medication targeted directly at the virus.

Typically, people infected with dengue virus are asymptomatic (80%) or only have mild symptoms such as an uncomplicated fever. Others have more severe illness (5%), and in a small proportion it is life-threatening. The incubation period (time between exposure and onset of symptoms) ranges from 3–14 days, but most often it is 4–7 days.  Therefore, travelers returning from endemic areas are unlikely to have dengue if fever or other symptoms start more than 14 days after arriving home. Children often experience symptoms similar to those of the common cold and gastroenteritis (vomiting and diarrhea) and have a greater risk of severe complications, though initial symptoms are generally mild but include high fever.

Associated problems
Dengue can occasionally affect several other body systems,[8] either in isolation or along with the classic dengue symptoms. A decreased level of consciousness occurs in 0.5–6% of severe cases, which is attributable either to infection of the brain by the virus or indirectly as a result of impairment of vital organs, for example, the liver.

Other neurological disorders have been reported in the context of dengue, such as transverse myelitis and Guillain-Barré syndrome. Infection of the heart and acute liver failure are among the rarer complications.

Diagnosis
The diagnosis of dengue is typically made clinically, on the basis of reported symptoms and physical examination; this applies especially in endemic areas. However, early disease can be difficult to differentiate from other viral infections. A probable diagnosis is based on the findings of fever plus two of the following: nausea and vomiting, rash, generalized pains, low white blood cell count, positive tourniquet test, or any warning sign (see table) in someone who lives in an endemic area. Warning signs typically occur before the onset of severe dengue. The tourniquet test, which is particularly useful in settings where no laboratory investigations are readily available, involves the application of a blood pressure cuff at between the diastolic and systolic pressure for five minutes, followed by the counting of any petechial hemorrhages; a higher number makes a diagnosis of dengue more likely with the cut off being more than 10 to 20 per 2.5 cm2 (1 inch2).

The diagnosis should be considered in anyone who develops a fever within two weeks of being in the tropics or subtropics. It can be difficult to distinguish dengue fever and chikungunya, a similar viral infection that shares many symptoms and occurs in similar parts of the world to dengue. Often, investigations are performed to exclude other conditions that cause similar symptoms, such as malaria, leptospirosis, viral hemorrhagic fever, typhoid fever, meningococcal disease, measles, and influenza.

The earliest change detectable on laboratory investigations is a low white blood cell count, which may then be followed by low platelets and metabolic acidosis.[5] A moderately elevated level of aminotransferase (AST and ALT) from the liver is commonly associated with low platelets and white blood cells.[7] In severe disease, plasma leakage results in hemoconcentration (as indicated by a rising hematocrit) and hypoalbuminemia.[5] Pleural effusions or ascites can be detected by physical examination when large,[5] but the demonstration of fluid on ultrasound may assist in the early identification of dengue shock syndrome.[1][5] The use of ultrasound is limited by lack of availability in many settings.[1] Dengue shock syndrome is present if pulse pressure drops to ≤ 20 mm Hg along with peripheral vascular collapse.[7] Peripheral vascular collapse is determined in children via delayed capillary refill, rapid heart rate, or cold extremities.[8]