One genetic legacy is protective. Another is harmful 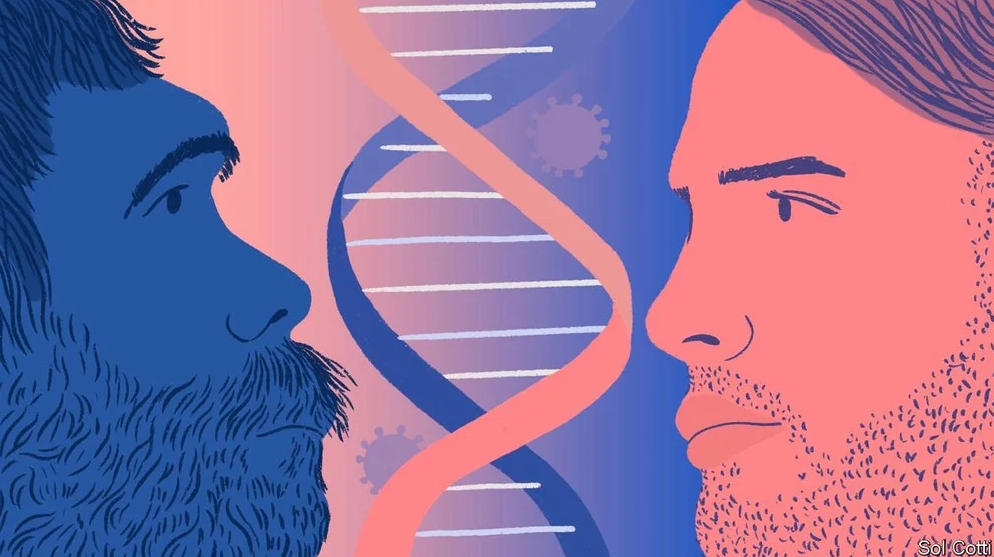 AS BEST AS scientists can tell, Neanderthals died out around 40,000 years ago. But they did not vanish from the Earth entirely. In the past decade it has become clear that Neanderthals mated with the ancestors of modern humans, and that at least some of those unions produced viable offspring.

The upshot is that almost half of the Neanderthal genome still survives, scattered in small quantities among almost all modern people’s DNA. (The exception is those with mostly African ancestors, for Neanderthals seem never to have lived in Africa.)

Such genes have been associated with everything from hairiness to fat metabolism. Many seem to be related to the immune system, and to affect the risk of developing diseases including lupus, Crohn’s and diabetes. A pair of recent papers suggest covid-19 belongs on that list as well. Two long sections of DNA, both inherited from Neanderthals, appear to confer resistance or susceptibility to severe covid-19, depending on which is present.

The work was led by Hugo Zeberg and Svante Paabo at the Max Planck Institute for Evolutionary Anthropology in Leipzig, whose researchers pioneered the study of Neanderthal DNA. Their first paper, published in Nature in September, described one Neanderthal DNA string, known as a “haplotype”, that is associated with a higher risk of serious illness. Having one copy of the haplotype, which is found on the third of the 46 chromosomes possessed by humans, doubles the chances of a trip to intensive care. Those unlucky enough to possess two copies—one from each parent—face an even higher risk.

That genetic bad luck is not evenly distributed. The gene-sequence is most common among people of South Asian descent, with 63% of the population of Bangladesh carrying at least one copy; and among Europeans, where the prevalence is around 16%. As expected, it is virtually absent from Africa. More strikingly, it is also very rare in large swathes of eastern Asia.

Exactly what the haplotype does is not clear. One gene within it encodes a protein that interacts with the cellular receptors that SARS-CoV-2 (the virus which causes covid-19) uses to enter cells and hijack them. The haplotype is also thought to be involved in the production of signalling proteins, called cytokines, that help to regulate the immune system. An overly aggressive immune response is one mechanism by which covid-19 kills.

On the other hand, some of those cytokines protect against cholera. The researchers speculate that may be why the haplotype is common in Bangladesh and India, where cholera has long been a problem. And there is evidence that, even as evolution has been boosting the haplotype in some populations, it has been working to remove it from others. “The frequency differences between South Asia and East Asia are so dramatic that we cannot help but suspect that past selection is responsible,” says Dr Paabo.

The second study, published this week in Proceedings of the National Academy of Sciences, concerns another Neanderthal haplotype, found on chromosome 12. Its effect is protective, though it is also less potent: having a single copy is associated with a 22% lower chance of critical illness.

This helpful sequence is more well-travelled than the harmful one. It is present in every part of the world except sub-Saharan Africa. Between 25% and 35% of the population of Eurasia carry at least one copy. In Vietnam and eastern China more than half the population are carriers. It also exists, at much lower rates, among American populations of mainly African descent, many of whom will have some more recent Eurasian ancestry as well.

Scientists also have a better idea of what it does, for it was known to researchers even before the news of its Neanderthal origin. The haplotype hampers the spread of RNA viruses, of which SARS-CoV-2 is one, by driving cells infected with them to self-destruct quickly. It is known to provide at least some protection against West Nile virus, hepatitis C and, intriguingly, SARS-CoV-1, which caused the SARS outbreak that began in 2002.

Once again, the hand of natural selection is visible. The genes in the chromosome-12 haplotype are found in other mammals, and have been lost several times in other species. That hints that carrying them comes at a significant cost, leading them to be removed if they are not being heavily used. That they are common in most human populations suggests RNA viruses have been a thorn in humanity’s side for much of its evolutionary history.

The researchers hope that their work might help shed light on why some countries, and some populations within countries, appear to have been hit harder by covid-19 than others. They point out, for instance, that Britons of Bangladeshi heritage suffer severe covid-19 at roughly twice the rate of the general population. But disentangling the effects of DNA will be tricky. Age, obesity and sex, among other things, all influence the severity of covid-19. Comparisons between countries are complicated by definitional differences and the difficulty of performing accurate counts, especially in poor countries. Despite the prevalence of the harmful haplotype, the official covid-19 death rate in Bangladesh is just 5.1 per 100,000, an order of magnitude lower than in countries where the haplotype is much rarer.

Still, a reminder that genetics matter alongside those other factors is still useful. If covid-19 becomes an endemic disease, as seems likely, cheap gene sequencing may, in future, help doctors assess which patients are likely to be vulnerable to its worst effects.

Understanding the mechanisms by which genes confer resistance or susceptibility may help with the search for drugs. And history suggests that SARS-CoV-2 is unlikely to be the last novel coronavirus to make the jump to humans.

If some populations are likely to be more vulnerable than others, that is worth knowing for next time.

Read the original article at the Economist.

- Advertisement -
Paying the bills
Previous articleTraffic lights are STOP signs at night!
Next articlePostponing travel is the best decision at this time: Daniel Salas

QCOSTARICA - By complying with the sanitary measures, the faithful will...
Read more

San Jose, Costa Rica - The fossil of a...
National