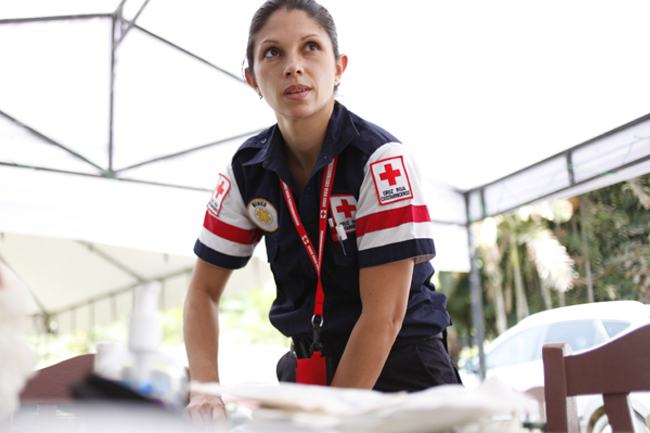 By Arianna McKinney, Voice of Nosara

The Nosara Red Cross now counts on the assistance of Dr. Yennifer Jimenez, who came to live in Nosara in November and is volunteering a minimum of 20 hours per month to attend to accidents and emergency situations prior to hospitalization.

“The idea is to give a better focus on the medical attention given here in Nosara and transfer [the patient] in better conditions,” she said, explaining that there is a 60-minute window referred to as the “hour of gold” during which to act in order to avoid worse complications later.

The benefits of having a doctor with the Red Cross have shown in many ways already.

For example, at the beginning of February Jimenez was able to assist a 14-year-old boy who was shot in his left arm in an accident with his brother. Jimenez said the bullet was a kind that explodes, making a deep wound that fractured the bone and ripped the flesh. She related that normally the Red Cross would only be able to bandage the wound and transport the boy to the hospital, but she, as a medical doctor, was able to perform a surgical wash and provide medication for the pain as well so that he arrived in the hospital in better conditions.

The boy is currently at Hospital Mexico where he is receiving additional care so that he won’t lose his arm, she reported.

Jimenez studied medicine at the International University of the Americas in San Jose and has 13 years experience working with the Caja (Costa Rican Social Security) in Siquirres. For the past two years, she also volunteered with Red Cross in Siquirres. However, she decided to move to Nosara because her husband was living and working here and they wanted to be together as a family.

Carlos Gutierrez Hernandez, secretary of the Nosara auxiliary committee, pointed out that having a paramedic in the ambulance is not the same as having a doctor. “She fills a very important spot,” he noted. “Nosara lacks a lot of medical services. It gives us better security, of course.” Carlos Villalobos Espinoza, president of the Nosara committee, said they are seeking permission to make her permanent and noted that they would be the first Red Cross committee in the country to have a permanent doctor.

They met with Red Cross management in San Jose on Wednesday, March 21, to present the proposed work plan for the doctor and are waiting for approval from the National Council of the Red Cross, which should meet by mid April.