Decree To Allow Police Use Of Heavy Weapons Dead 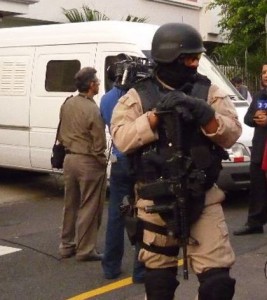 The group that filed an objection before the Tribunal Contencioso Administrativo (TCA) – Administrative Court – announced that the “Arias Decree No. 34852-MSP”, that would allow police to use prohibited (banned) weapons to contain demonstrations, is dead.

“With great joy I inform you that the Decree signed by Nobel Peace Prize winner Oscar Arias to allow the Ministerio de Seguridad Publica to use prohibited weapons to control demonstrations, rests in peace thanks to the assistance of those who bravely signed the complaint (depsite the storm of criticism), but more especially to the tenacious and tireless work and monitoring by our lawyer Roberto Zamora”, said Flora Fernández, one of the plaintiffs in the case.

Fernández explained that the repeal of the decree was not intended to let the “police forces to fight criminals with ‘toy guns’, as some malicious warmongering, military enthusiasts and lovers of guns and violence said, but to prevent the repression of legitimate protests with banned weapons.”

In the judgement, the Tribunal Contencioso and the Sala Primera recognizes that “police activity and deployment be reasonable according to aggression”, said Fernández.

What it means in real terms is that the decision to use heavy (banned) weapons against defenseless civilians is not up to the simple autorization of a police chief.