#DontBeFooled: Tax reform does not include charging VAT for purchases made abroad 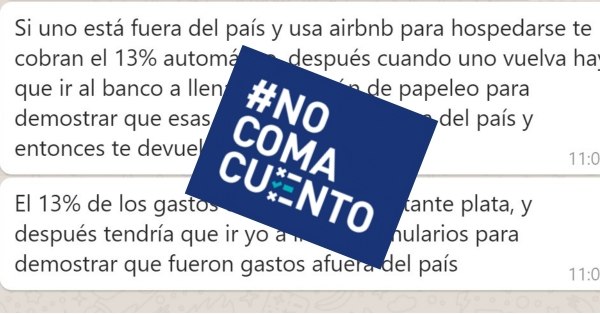 The Plan Fiscal (Tax Reform), approved in the first debate by the Legislative Assembly last week, does not include such a charge as it was erroneously indicated a massive message circulating on the WhatsApp platform as reported in La Nacion.

The tax reform establishes that the VAT, the tax that would replace the current sales tax, will only be applied only to the goods and services acquired in Costa Rica.

#DontBeFooled. Not everything in social networks is the truth.

“A tax on value added is established in the sale of goods and in the rendering of services, regardless of the means by which they are provided, made in the territory of the Republic,” says Article 1 of the approved text.

The false information also mentions an alleged VAT refund method that is not part of the bill Ley de Fortalecimiento de las Finanzas Públicas, the message falsely stated that after adding the 13% tax on purchases made abroad, (Costa Rican) banks will return it if their cardholders show that they made purchases outside the country.

VAT Tax On Purchases Made Online

In the case of purchases made online, the VAT will be applied only to services that are consumed from Costa Rica, but not on purchases of tangible products.

Among the services that will be taxed are subscriptions to platforms such as Spotify, HBO Go, Amazon Prime, Hulu, Airbnb, online storage services (ie  website hosting, cloud storage) and mobile applications that manage collections, such as express food and transportation services, Uber for example.

On the other hand, the purchases of tangible products are exempt through platforms such as Amazon, Ebay, and other online stores and any other purchase that one makes online abroad.

An exception to the tax on online services will be those that are purchased with a credit card from a national issuer, but that will be consumed abroad. For example, the purchase of a Spotify Premium subscription to give it to a relative who lives abroad. In that case, the buyer would have to go to the tax administration offices to request the refund of the taxes that were charged.

If the tax reform is approved in the second debate, the VAT will have a general rate of 13% on the sale of goods and services; 4% on health services and air tickets; 2% on medicines, personal insurance and purchases made by public universities; and 1% on the basic basket, agricultural products and veterinary products.

Important for Expats and Visitors

For expats living in Costa Rica, it is important to know the new tax rules, if and when they are implemented, so as not to fall victim to misinformation.

#DontBeFooled. Not everything in social networks is the truth.