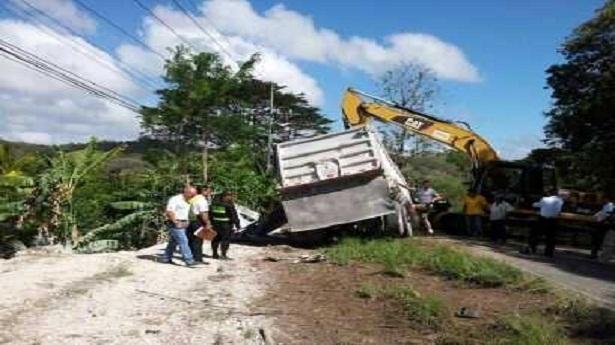 Six people were crushed under the weight of trailer loaded with stones in the late hours of Saturday night. The accident occurred on the Interamerican highway between Liberia and La Cruz.

Authorities say the driver of the heavy truck, who as impaired with a blood alcohol reading of 1.7, hit a small vehicle on a curve causing the truck’s trailer to flip on its side crushing the light vehicle.

The three young couples inside the small vehicle did not have a chance.

The Policia de Tránsito and the Organismo de Investigación Judicial (OIJ) are still putting the pieces together, but without a doubt alcohol played a major role in the incident.  According to preliminary reports, the light vehicle, a Toyota Corolla, as dragged for about 30 metres (1oo fee) after being hit head on by the truck, when the loaded trailer flipped.

The driver walked away from the accident without as even a scratch.

For now all that Tránsito is saying is that the truck was current with the vehicular inspection (Riteve), while the light vehicle did not have the Riteve nor the Marchamo (vehicle circulation permit) current.

The driver of the truck, whose identity was not disclosed to the press, has 22 traffic tickets since 2001 and was being held as suspect of vehicular manslaughter.

QCOSTARICA - “I know that I am here for...
Cartago