It was 5:53am when many in the Pacific coastal area of Playa Jacó were awakened by an earthquake registering 4.2 on the Richter Scale 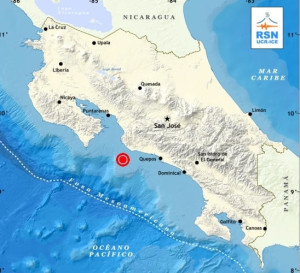 The tremor was also felt in Alajuela and San José.

There were no reports of damage or injuries.

The RSN says that the quake was caused due to the subduction of the interaction between the Cocos and Caribbean plates.

Playa Jacó and nearby Playa Herradura are favourite tourist destinations for both foreigners and nationals.

QCOSTARICA - Within a few months, the Juan Santamaría International Airport or San Jose airport (SJO), went from being “bustling” to becoming a practically...
World

QCOSTARICA - After a year of no work, engineers, technicians, producers, cleaners, food and beverage personnel, among others, held a peaceful march this Thursday...
Business

QCOSTARICA -Viatris, one of the largest generic drug manufacturers in the world, announced the opening of commercial operations in Costa Rica, with an initial...
San Jose

QCOSTARICA - Public worker unions from the Education, Health, Judiciary, Transport, and public universities, among others, will join forces this Friday, March 5, in...
Venezuela

TODAY VENEZUELA – The Central Bank of Venezuela (BCV) announced Friday the introduction of three new banknotes: 200,000, 500,000 and one million bolivars. But with...
Banking

QCOSTARICA - Financial entities seek through the use of their virtual channels to promote the placement of new loans due to the impossibility, for...
Health

QCOSTARICA - The Ministry of Public Security (MSP) reported on Friday that, in a period of two weeks, 47 travelers have tried to leave...
Dollar Exchange