Edén Pastora to Chinchilla: “Calm Down, Curb Your Passions and Don’t Hate Me So Much”

With an acetic tone, Edén Pastora, the renowned “Commander Zero” (Commandante Cero in Spanish), who is again the focus of controversy between Nicaragua and Costa Rica and the subject of an international warrant for his arrest on the behest of the Costa Rican government, said he has no fear of coming to the country to face personally Deputy Director of Security, Celso Gamboa and Presidenta Laura Chinchilla.

Pastora recommends that the Presidenta “curb her passions” and says that he understands it is all politically motivated given the country is in the midst of an election. 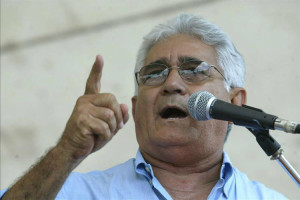 “Doña Laura I understand, that you want to make of Edén a political scapegoat in Costa Rica and I understand the Ticos (Costa Ricans) who are victims of a media campaign…so calm down, put a brake to your passions, and don’t hate me so much”, Pastora told CRHoy.com in an interview.

Pastora says he still mystified by the actions of Interpol – the International Police Organization – placing him on the wanted list on the word of Costa Rica authorities.

He added that he is considering asking his government for permission to come to Costa Rica. The “Commander” says he has no problems with “grabbing the bull by the horns“, to see what they will do to him. “I would love to have Costa Rican nationality, but they would take it way for my politicking”, said Pastora.

The Nicaraguan said his wife and four of his children have Costa Rican nationality. He also confessed that he is closely linke, emotionally and politically, to Costa Rica where he claims to have lived his “happiest moments”. Among his Costa Rican friends, Pastora says are, Figueres, Angulo and Quevedo, whom he calls “his true friends”.

“I will consult with international lawyers about suing the Corte Interamericana de Derechos Humanos (CIDH) – (Human Rights Court which is located in Costa Rica), Interpol and the government of Costa Rica, who are abusing and violating my human rights”, Pastora told CRHoy.com.

Pastora said that among his responsibilities to the Ortega government is the dredging of the San Juan river.

“Let them arrest me, do what they did to Francisco Morazán or Mora or to Cañas and Carrillo, even name a park after me or a city or a port, I have no fear of prison…if it were for common crimes I would have fear, for politics not. If I go (to Costa Rica) before December 24 it would be my Christmas gift to them”, Pastora said.

As to reports claiming that he wants Guanacaste for Nicaragua, he said they are pure falsity and he would never consider harming Costa Rica in any way.

(DW) Jon works for the local government in the US state...
Read more

HQ - The Fuerza Publica (National Pollice) intervened an agglomeration of people on the outskirts of the Rincón Grande de Pavas school during the...
National

Today, Saturdday, June 5, only EVENS can circulate. The measure is countrywide and applied between 5:00 am and 9:00 pm, save for those under...