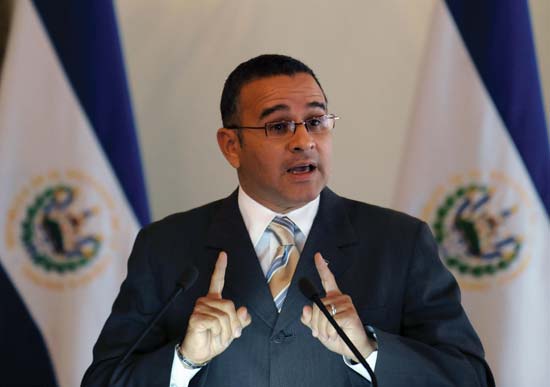 Former President Mauricio Funes has reportedly left El Salvador on business as authorities raid properties in search for evidence he committed acts of corruption while in office, a case likely to test the new attorney general’s resolve to combat impunity for high-level politicians.

On August 17, El Salvador’s Attorney General’s Office raided seven properties belonging to Miguel Menéndez, known as “Mecafé,” in search of documents that would reveal corrupt acts committed by Funes during his 2009-2014 presidential term, La Prensa Grafica reported. Mecafé led the “Friends of Mauricio” movement that supported Funes during his 2009 presidential bid. He is also the owner of the company that won the greatest number of private security contracts awarded by the Funes administration, according to the Salvadoran news outlet.

“Since the Funes administration, it is known to all that there have been many acts of corruption involving these companies” of Mecafé, said Andrés Amaya, head of the Anti-Corruption Unit within the Attorney General’s Office.

Funes wrote on Twitter on August 18 that he is no longer in El Salvador. The former president said he is traveling to do consultancy work, not “fleeing” the country. He has repeatedly denied any wrongdoing, and called the investigation “ridiculous” and a “show.”

Funes is being investigated for illicit enrichment, embezzlement, participation in illicit business, and influence trafficking, according to El Diario de Hoy. The Supreme Court ordered the freezing of four of Funes’ bank accounts and several other assets back in February, also for suspected illicit enrichment.

The investigation is a positive sign Attorney General Douglas Meléndez, who was sworn in to office in January, is willing to tackle political corruption. But no arrest warrant has yet been issued for Funes, and the Attorney General’s Office has not formally indicted the former president, a potential sign that Meléndez is not prepared to seek a conviction.

Meléndez is under added pressure because he succeeded Luís Martínez, an attorney general who faced down allegations of corruption. Last December, six members of the US House of Representatives signed a letter urging Salvadoran authorities to select a new attorney general “focused on defeating corruption and organized crime.”

Allegations of corruption among high-level officials in El Salvador extend beyond Funes and Martínez. Funes’ two immediate predecessors, Francisco Flores (1999-2004) and Elías Antonio Saca (2004-2009) have also come under investigation for using their high office for personal enrichment. Flores was ordered to stand trial but died in January 2016 before the case went to court. While both Saca and Flores were with the opposition party, Funes was president for the governing Farabundo Martí National Liberation Front (Frente Farabundo Martí para la Liberación Nacional -FMLN).

Given that El Salvador’s last three presidents have been investigated for corruption, it is hardly surprising that a reported 97 percent of Salvadorans are in favor of creating an international anti-impunity commission similar to the ones that have been set up in neighboring Guatemala and Honduras.

QCOLOMBIA – For the past two weeks, mass protests that started on April 28, have rocked Colombia, leaving at least 42 people dead and hundreds...
Business

QCOSTARICA - 2020 was marked as a complex year worldwide due to the Covid-19 pandemic, however, the following are entrepreneurs who were not only...
Infrastructure

QCOSTARICA - The country registered a new record of covid-19 infections this Wednesday, reaching 3,173 confirmed cases in a period of 24 hours. The figure...
Vaccine

QCOSTARICA - Applying 150,000 doses per week of the covid-19 vaccine and establishing stricter vehicle restrictions temporarily, are the two main proposals of the...
Health