A tour bus bound for the Olympic city of Rio de Janeiro was stopped in Paraguay carrying 296 kilograms of cocaine, further highlighting the criminal opportunities presented by the Olympic Games despite the Brazilian government’s assurances of complete security. 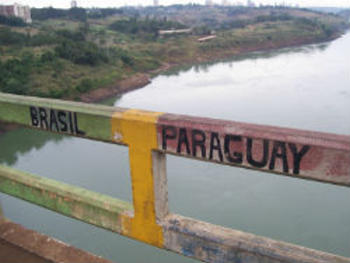 Paraguayan officials said two men were arrested August 14 for attempting to smuggle the cocaine over the border to Brazil. Atilio Cañiza Fernandez, 52, and Adolfo Ramon Mendoza Aquino, 46, have been charged with international drug trafficking and other crimes, ABC reported.

The men were attempting to transport the cocaine on a bus carrying the logo and credentials of the commercial company VIP Tours S.A. and was bound for the Olympic City of Rio de Janeiro. The bus was legally sold by the VIP Tours S.A. firm back in July, with the expectation that its logos and credentials would be removed, the company said. The bus was apparently carrying no passengers, which aroused suspicion. It was stopped near the friendship bridge which connects Ciudad del Este in Paraguay with the Brazilian city of Foz do Iguaçu, reported ABC.

Ciudad del Este and the surrounding Tri-border Area — where Paraguay, Brazil and Argentina meet — has long been a notorious hub for the smuggling of contraband and counterfeit goods.

Officials from Paraguay claim that based on the quality of the seized drugs, they believe the cocaine originated in Colombia and had a value of $3 million in the Brazilian market.

Cocaine seizures such as this highlight the various opportunities afforded criminals during the Olympics in Rio de Janeiro. Foreign athletes being robbed, drug trafficking, and rising violence in certain parts of Rio de Janeiro have tarnished the image of the Olympic Games.

These incidents have occurred despite the Brazilian government’s deployment of some 85,000 security forces and a budget of $215 million for security. It appears that authorities are barely keeping a lid on security issues.

The tri-border area where the seizure occurred is notorious for impunity and what has previously been called an “avalanche of contraband.” It is a notoriously difficult area to patrol.

QCOSTARICA - It is totally false that the Government has changed the sanitary measures, as claimed by disinformation messages circulating on social networks and...
National

QCOSTARICA - The national weather service, Instituto Meteorológico Nacional (IMN) reported that intense rainfall will continue throughout the Central Valley, the Pacific and the...
Health

QCOSTARICA - The spike in cases of covid-19 in recent days set off the alarms and has the authorities analyzing the possibility of bringing...
Limon

QCOSTARICA - For the third consecutive night, the Ruta 32, which connects San José with Limón, was closed from 7 pm Friday and until...
Rico's Covid-19 Digest

QCOSTARICA - The Camara de Comercio (Chamber of Commerce) called on its members not to loosen the protocols against covid-19, after the warning from...
Coronavirus

One surprising star of the coronavirus pandemic response has been the molecule called mRNA. It’s the key ingredient in the Pfizer and Moderna COVID-19...
National

QCOSTARICA - Two men became the first victims of the rains and bad weather that has hit the country since last Wednesday, one of...