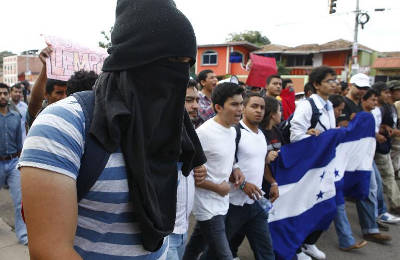 Students from the Honduran National Autonomous University (UNAH) protested because of the triumph of Juan Orlando Hernandez (National Party) in the general elections on November 24.

With interruption of classes, concentrated in the halls of the University, dozens of young students showed their non-comformity with Hernandez as the next President of Honduras.

Hernandez was declared the president-elect of Honduras two days ago by the Electoral Supreme Court (TSE) with 36.80 percent of the votes, compared to the 28.79 percent obtained by contender Xiomara Castro, candidate of letwing Libertad y Refundacion.

However, UNAH students said they think the elections were full of inconsistency, with poor results, because of irregularities when handling the total of the voting entries and the manipulation of the voting system, so they will not accept Hernandez as President of Honduras, a country now submerged in a deep economic crisis.