End of pineapple production this year faster than expected

Costa Rica knows the so-called ‘natural phenomenon of fruit’. From May to the end of July there is an uncontrollable growth spurt in fruit crops. The production of pineapple doubles, followed by a decrease in production in the months of August and September. 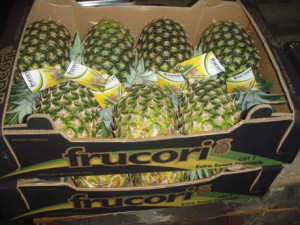 “During this period of abundance, prices fall and traders try to sell the fruit to households with special offers and discounts. The phenomenon of the growth spurt this year was very short; only 4 to 5 weeks. The decline in production started in week 23 and will likely last until week 28,” explains Ileana Chaves, of Frucori Comercializadora SA.”

Comercializadora Frucori S.A. is a manufacturing and exporting company in Costa Rica, trading in fresh pineapples from the Golden brand (MD2). The company has a production area of 170 hectares (and wants to expand to 200 hectares). 95% of its production is exported to Europe and 5% to the US. The price in Europe is more stable than in recent years, with between 8.5 and 11 Euro per box. In week 25, the highest price is expected.

The fruit produced by Frucori S.A. is GlobalGAP and Tesco Nurture’s Choice certified. The company is currently gunning for a Huella the Carbono Neutro Certificate.

QCOSTARICA - Six months after the start of vaccination against covid-19, will it be time to open the campaign to those who want to...
Nicaragua