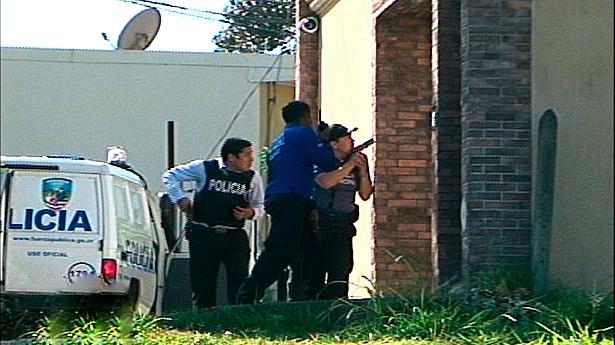 All five assailants of a home invasion in Escazú on Wednesday, including a former municipal police officer, are in custody. The Organismo de Investigación Judicial (OIJ confirmed the detentions.

Wednesday afternoon police responded to a home alarm when the assailants forced their way in the home.

The couple inside were able to get out unhurt and two of the assailants caught at the scene due to the fast response by the Policia Municipal de Escazú. The other three caught hours later.

During the investigation police learned that one of the assailants was once one of them, a police official identified as a Calero, who is under suspension for more than six months. Investigators also learned the home is that of Calero’s former employer years back.

QCOSTARICA - Costa Rica already reports variants of SARS-CoV-2, the virus that causes covid-19 that emerged in the United Kingdom and South Africa and...
Vaccine

QCOSTARICA - A new batch of vaccines of 92,430 doses, and the largest received since December against covid-19, arrived Tuesday, as part of the...
Political Economy

QCOSTARICA - The restrictions for travelers imposed by the United States, Canada, Mexico, France, Spain and the United Kingdom, six of the main sources...
Travel

QCOSTARICA - Widespread vaccination is the key to overcoming the COVID-19 pandemic and reinforcing the economic recovery in Latin America, Fitch Ratings said in...
Pura Vida

QCOSTARICA - The quijongo is now in very good health thanks to the care of the people of Guanacaste, who are dedicated to protecting...
News

QCOSTARICA  - Twenty eight Costa Rican's are lining up who want the position that Carlos Alvarado when he leaves office on May 8, 2022,...
Travel

QCOSTARICA - Need to leave the country and require a test to detect SARS-CoV-2, the coronavirus that causes covid-19? The Cámara Costarricense de la Salud...
Employment

QCOSTARICA - Amazon Web Services, Inc. (AWS), a division of the Amazon company, announced the opening of its first Central American office in Costa...