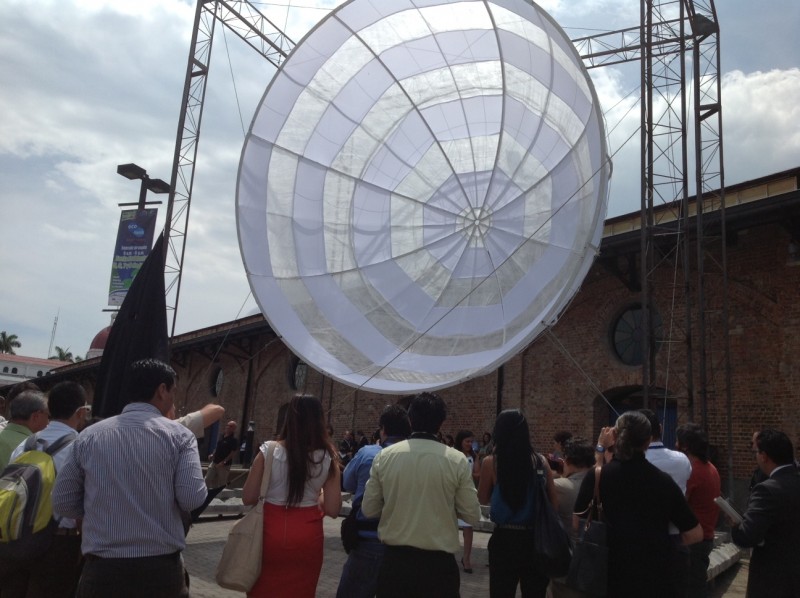 In conjunction with the Environmental Fair an “esmog” was erected in front of the Antigua Aduana building to meter the conscience of the people.

Sometimes we are so accustomed to the sounds of the city and the smoke of the cars that we do not notice the pollution in which we are immersed every day.

Artist Franceso Bracci created the “urban lung”.  “The idea as to make a large-scare filter, a funnel, that would capture the invisible particles”, explained Bracci. The work of art, which functions as a smog meter is to bring out the consciousness of Ticos, added Bracci.

Until Saturday June 8, the MINAE is sponsoring an environment fair that is open to the public, who can take in talks on the environment and browse the exhibits of more than 100 businesses.

Others celebrating Environment Day are volunteers of Walmart and RAE Engineers, who, together with the Municipaliy of Tibás, reforested the protective zone of the Rivera creek, located in San José.

The voluntees planted some 250 trees of native species, in order to attract birds and insects. They also picked up trash along the banks of the creek.

For its part, the  Universidad de Costa Rica (UCR), on Wednesday banned all motor vehicles from entering the campus and, instead, encouraged students to use clean transport such as cycling.