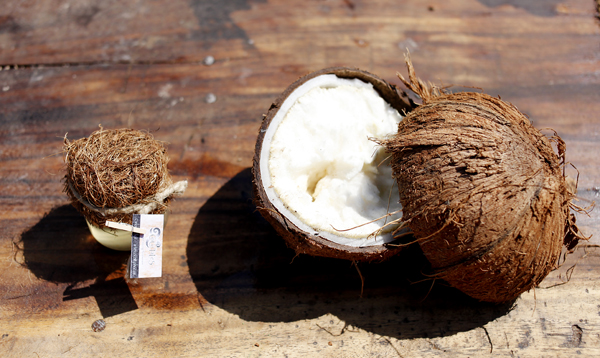 Carlos Caiceda Perlaza comes from a coconut plantation family on the Pacific in Colombia where they cultivated and sold coconuts. There, they processed the coconut for its juice and used it to cook shrimp, Carlos recounted. But it was when he came to Costa Rica that coconuts created a nostalgia in him, reminding him of his feelings for his family, and he became curious about what else coconut could be used for besides consumption.

He was renting a small house in Montezuma facing the ocean when rainy season hit. Stuck inside with time on his hands, he found tools that were left behind by a Mexican artist and decided to try making things out of coconut, practicing “without any particular orientation.” Later a friend gave him advice on how to not break his tools so often and showed him some techniques, but Carlos was developing his own style. 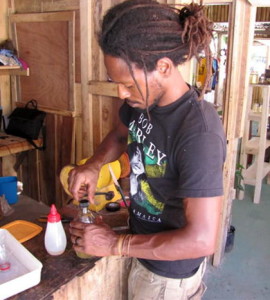 or Carlos, experimenting with coconuts has become both his hobby and his work. “I think that since I discovered it, I am happy,” he said.

He has been crafting things out of coconut for 10 years now, and three years ago started a business in Samara called Cocotales, the name for coconut plantations in Colombia.  Aside from jewelry, bowls and cord made from coconut, he and his companions have been experimenting lately with even more ways to use coconuts, from fiber to oil. They even tried making paper, but it turned out more like cardboard, so Carlos considers it “a failure.”

Alonso Lopez Perez, who began working with Carlos about six months ago, has also been charmed by the nut. “It’s cool, like alchemy,” he said. “We are producing something from nothing, something that is difficult to do and has its process.”

Alonso explained that it’s better to work with coconuts in winter when they are soft like a sponge.  In the summer, they soak the coconuts in a barrel of water to soften them.

When the coconut is moist, Carlos said they hit it hard with a hammer to release the fibers. They extract three types of fibers— a long thread that is good for things like bracelets, a short one that they use to make a rough fabric for covering lamps, and a cotton-like fiber that they can spin like wool to form a strong rope. Carlos is contemplating making a type of spinning wheel to work with the fiber.

Their latest venture is extracting coconut oil. Carlos explained the process: first they peel the coconut and extract it with a drill or a metal device; then they place the coconut meat in water in a plastic bin and let it ferment for a couple of days. The coconut oil separates from the water.  They collect the coconut fat and cook it in a frying pan to separate the impurities from the oil and then filter it.  After letting it sit for a couple of days the oil becomes more clear and is ready for bottling and use.

The process takes a lot of time and labor, according to Carlos, but they are enjoying learning new ways to use coconut.

QCOSTARICA - Good news for Ticos with traveling fever! From Friday, June 25, Germany will allow entry of travelers from Costa Rica as long...
Travel