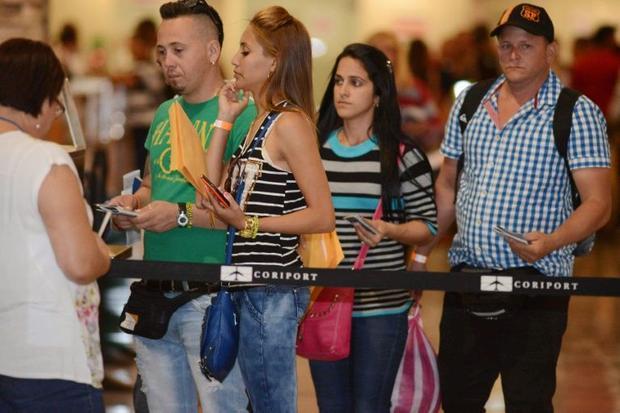 QCOSTARICA – Seeking to fulfill their ‘American’ dream, the first 180 of the thousands of Cubans who left their homeland en route to the United Stated and stranded in Costa Rica for almost two months, were on their way last night.

In the video posted on the social media by President Luis Guillermo Solis, we see the Minister of Foreign Affairs, Manuel Gonzalez, personally sending off the Cuban migrants, with the best wishes delivered on board the Avianca flight headed for El Salvador, where they will then be buses to Guatemala, to the Mexico border, to make their way to the U.S. border.

The Cuban migrants, in mid-November became stranded in the country when Nicaragua — a Cuban ally — closed its borders to them. Through diplomatic efforts mired by lack of support from the other Central American countries and the Central American Integration System (SIC), the government of Luis Guillermo Solis was able to broker a deal.

“Thank you Mr President, Cubans are in eternal debt of the love, understanding and respect for your country for its beautiful people. Thanks to you and your officials who have supported us, but the best are the Ticos. I love Costa Rica, Pura Vida,” posted Yasser Rojas on the President’s Facebook page.

The Cubans left the La Cruz near the Peñas Blancas border with Nicaragua shelters shortly after 6:00pm, headed for the airport in Liberia an hour away, when at around 10:30pm took off the Avianca flight to El Salvador.

An hour later they landed in El Salvador, met by that country’s Foreign Minister Hugo Martinez and immigration officials. Buses were waiting to take them to neighboring Guatemala with a police escort, where they will then travel to the Mexico border, where with a 20-day visa by Mexican immigration officials, will make their own way to the US border and to their new lives in America.

This is a test run.

If the chartered plane-and-bus trip is successful, other flights will follow as early as next week, moving the almost 8.000 other Cubans stranded in the country.

Crisis drowns restaurants and bars as entrepreneurs struggle to survive

QCOSTARICA - During 2020, the bar and restaurant sector had to...
Read more

The Internet can be a scary place for people...
Trends