First Woman To Vote in Costa Rica Dies At Age 95

Bernarda Vásquez Méndez, the first woman to cast a vote in Costa Rica, died at the of 95 on Wednesday. Radio Santa Clara, the official voice of the Diocese of Ciudad Quesada, broke the notice on Tuesday on the poor health of Vásquez, who was also a community leader of La Tira, San Carlos, in the province of Alajuela. 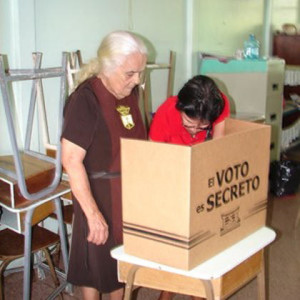 Margarita Vásquez, Bernarda’s niece said her aunt underwent a delicate surgery due to internal bleeding after suffering a fall on Monday. Due to her delicate condition, Bernarda was transferred from the San Carlos hospital to the México in San José, where she died at 4:00 pm Wednesday.

Bernarda Vásquez Méndez cast her vote on Sunday July 30, 1950 to decide if La Tigra would belong to San Carlos or San Ramón, both in the provice of Alajuela.

Bernard had strong democratic convictions. On January 14, 2006, days before the election of Oscar Arias for a second term as president, Bernard told La Nacion, “The worst thing a Costa Rican can do is not to voice, because thanks to our political system we have always had peace and tranquility”.

Q MAGAZINE - Miss Costa Rica 2020, Ivonne Cerdas, will soon be traveling to Florida to represent the country in the Miss Universe pageant. After...
Rico's Covid-19 Digest

QCOSTARICA - This year Costa Rica celebrates 200 years of independent life. And the road to commemorate the 200th has begun with the launch...
National

QCOSTARICA - Panasonic announced that it will invest US$10 million dollars in the expansion of its plant in Costa Rica, in order to move...
San Jose

QCOSTARICA - Public worker unions from the Education, Health, Judiciary, Transport, and public universities, among others, will join forces this Friday, March 5, in...
Fuel Prices

QCOSTARICA - At 12:01 am this Wednesday, fuels will be more expensive, as the third price hike of the year takes effect. The increase in...