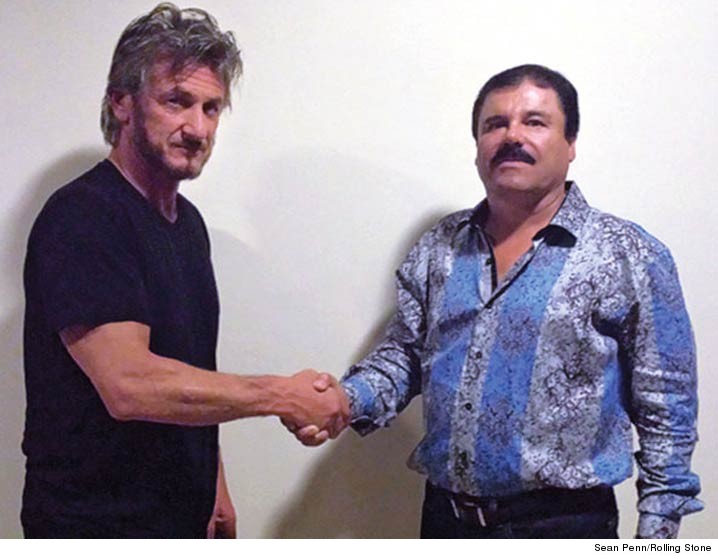 Q24N by Steven Dudley (Insightcrime.org) Sean Penn’s exclusive interview with Joaquín “El Chapo” Guzmán may have gotten Mexico’s drug kingpin captured, but that is only one mistake the intrepid, self-described “journalist” made when he traveled deep into the Sierra Madre.

A few caveats. First, I actually like Sean Penn, the actor. I enjoy his films and his acting. He is a unique and powerful on screen presence. Second, I am jealous. Of course I — and many other journalists — wanted this interview.

No journalist got as far as Penn did, exactly because Chapo was not interested in speaking to a journalist. But Penn is so wrapped up in his starring role as “journalist” that he forgets that he does not really represent any of us, much less our profession.

This is his — and as it turns out Chapo’s — fatal flaw. Ego is what drives this story, not journalism.

Here are five reasons why Penn failed as a journalist.

His fixer is Kate del Castillo, a Mexican actress who played La Reina del Sur in a soap opera. She is, by Penn’s account, a bit more realistic about her motives: she is interested in “making a film” about the drug lord and even manages to sneak in some product placement for a tequila brand “she is marketing.”

Penn, on the other hand, disguises his efforts as “journalism.” But his real interest appears to be in scooping Hollywood, who would undoubtedly pursue Chapo projects “with or without [Chapo’s] participation.”

Chapo seems to understand this and quizzes Penn about the movie business. Penn never comes clean. Instead he tells the drug lord, “when I do journalism, I take no payment.”

But by meeting Chapo, Penn would be positioned to make the definitive account, so he calls the editor of a magazine whose very foundation is the mixing of entertainment and journalism, Rolling Stone. It is a perfect match.

“I do consider it among my body parts vulnerable to the knives of irrational narco types, and take a fond last look, before tucking it back into my pants,” he writes.

But this fear is a facade. It is there to remind you (and himself) that he is courageous.

There are only two instances in which he appears to me to be in actual danger: when he is in a fast car and when there is a real possibility that Mexican forces may raid the camp. Neither of those instances involve anyone chopping off his sacred member. And even when he is in danger in the car, he reminds the readers that “I like speed. But not without my own hands on the wheel.”

But he is Sean Penn. He is a rock star, not some small town Mexican journalist messing with the narcos’ agenda. He is the agenda.

The subtext of Penn’s narrative is that there are victims who are simply taking advantage of “our insatiable appetite for illicit narcotics.”

Chapo is one of these victims. While he makes references to things like “carne asada,” or “grilled beef,” as a way of reminding us that there is human blood on Chapo’s hands, he is painted as a simple, yet charismatic man — a real gentleman who goes to the trouble of ensuring that his female guests get to their sleeping quarters in one piece.

(The magazine glorifies him as well with a sidebar of his “close calls and narrow escapes.”)

Aside from trafficking tons of cocaine, methamphetamine and heroin — which Penn has already justified in his earlier anti-drug war argument — we do not hear a single thing about any crime committed by Chapo.

Penn spends most of his time fawning over Chapo’s power: his trucks, his weapons, his kid’s watch, his hundreds of men waiting for his orders. I can understand not wanting to confront a criminal who is arguably responsible for the murder of THOUSANDS of people about their decisions, but I do think an exploration of that subject is necessary.

It can be direct or it can be subtle. That depends on the moment. And this is why it is important to understand that Penn is not a journalist. He does not have the experience to know when to push, when to be quiet; when to fondle an ego and when to challenge it; when to ask a direct question and when to put it in others’ mouths. He says they spent seven tequila-soaked hours together. They might as well have spent seven minutes.

“Whatever villainy is attributable to this man, and his indisputable street genius,” Penn writes, “He is also a humble, rural Mexican, whose perception of his place in the world offers a window into an extraordinary riddle of cultural disparity.”

The actual interview, which Penn and del Castillo later secure via video from the mountains, is even worse. There, Chapo is in complete control (his guy is asking Penn’s questions) and reinforces this narrative: he “defends” himself; he’s never picked a fight with anyone; he just wants to spend time with his family; and, just in case you were wondering, his relationship with his mother is “perfect.”

Instead, the article traffics in cheap useless, macho-man tropes: fast cars, big watches, dropping trow’ for a pee in the woods; he even rips a fart at one point (which Chapo, ever the gentleman, ignores).

It is Chapo who seeks out del Castillo to do a movie about him, and really what should have blown his cover of the humble, down-to-earth peasant that is “somewhat bewildered at the notion that he may be of interest to the world beyond the mountains.”

But Penn, as mentioned earlier, is not interested in finding Guzmán the person, only Chapo, the Hollywood ticket. In a kind of divine retribution, this may prove to be Chapo’s downfall. Mexican authorities told the Associated Press that Penn and del Castillo helped them track Chapo.

Still, for however arrogant Chapo is, Penn is his equal. Like a typical Hollywood movie, it is the gringo who is at the center of a story ostensibly about the suffering of others.

It is Penn who braves the day-long journey (most journalists would also like to leave their Los Angeles mansion in the morning to meet with the most wanted man in the world that evening); he who eats tacos and drinks tequila with the criminal mastermind; he who wonders whether he should try to accompany del Castillo when Chapo moves to take her to her sleeping quarters; he who sends via coded messages difficult questions such as, “Is it true what they say that drugs destroy humanity and bring harm?”

Mr. Penn, this is what they call in our business, “a softball…”