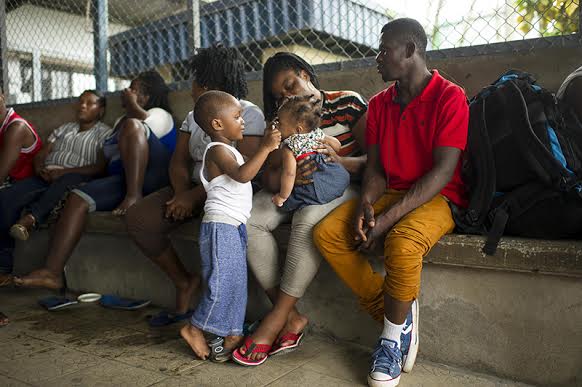 (QCOSTARICA) The flow of migrants into Costa Rica on the southern border with Panama has become unstoppable, hundreds arriving daily asking for a temporary visa, exceeding the capacity of the government response.

According to immigration officials, they receiving more than 150 requests daily, for the 25 day ‘in transit’ permit that allows the migrants to remain in the country legally as they look for solutions to move north, with their final destination being the United States.

Immigration is only equipped to handle a maximum of 100 people daily, forcing the migrants wait, wait…until their names are called.

Talking to La Nacion on the basis of anonymity, employees at the Paso Canoas immigration post say the wait is days: on Wednesday, “fichas” were for Tuesday.

This past week along more than 500 migrants, the majority from the Caribbean (the majority Haitians) and few Africans, entered the country at the Panama border, bringing the total since April to 5,600.

Half of those have already made their way north, by their own means, the others still in Costa Rica.  Ten people have been confirmed to have lost their lives, apparently drowned, in their attempt to cross lake Cocibolca, in Nicaragua.

La Nacion says that despite the order by government of Luis Guillermo Solis on Wednesday to increase policing of the border area, on Thursday there was no greater police presence noticeable.

“Rather, the migrants pass before the eyes of Panamanian and Costa Rican police,” reports La Nacion.

The current situation is very different from that lived in April when groups of migrants slept on the street of the border town and made Muslim prayers at set times, while asking for help.

Now, just they wait their turn at immigration, receive papers and buy transport, before going anywhere else, to take them to a Centre for Temporary Care of Migrants in Rio Claro, Golfito, where after learning of their true origin , it is determined whether they can travel freely through Costa Rica or if necessary initiate extradition proceedings.

Local authorities are not reporting incidents that endanger the safety of the locals, but there have been several arrests of coyotes (human traffickers) looking to take advantage of the desperate situation of the migrants, some to deprive them of their money (scams) by offering them passage to the northern border of Peñas Blancas, with Nicaragua, who has closed their borders to the migrants.

The situation lived in Costa Rica have get some relief with the decision of Colombia, a country where most of the migrants originate or pass through to Panama and our country, to get tough on the migrant situation.

On Tuesday, Colombia announced it will undertake emergency measures against illegal migration, including deporting thousands of Cuban and other migrants and reinforcing its borders.

QCOSTARICA - The vehicle restriction of odds and evens...
Central America