For Many Mothers, “Mother’s Day” Today In Nicaragua Is For Crying Over Their Children Killed in The Clashes 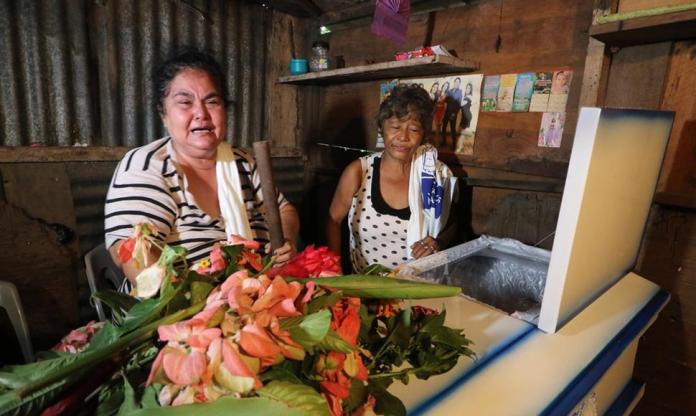 Today is Mother’s Day in Nicaragua. While many mothers across the country live the day with the presence of their children, almost 90 will be crying. Like Demesia Aburto, who on Tuesday, cried over the body of her son in a celestial coffin, decorated with freshly cut white flowers.

She tightened her gray hair, grasped her hands in the fabric of her black skirt and exclaimed to the sky: “My God, help me to endure this pain so barbaric that it is killing me, because I alone cannot”.

Cela Urbina is another mother who, since April 21, there has not been a day she doesn’t cry over the death of her son in Ticauntepe.

According to the report by Amnesty International on Tuesday, “Shoot to kill: Nicaragua’s strategy to repress protest” there are at least 85 other mothers crying for their children killed by, in the words of Nicaraguan activist Bianca Jagger, “President Daniel Ortega’s dirty war against his own people”.

Mother’s Day 2018 is a different day, changed by the events that began on April 18.

The El Nuevo Diario reports that through all the sadness, there is also the thirst for justice for that is the march held on Tuesday afternoon in Managua so-called: Mobilization in homage to the Mothers of April.

Joining the march will be Cela Urbina; Amanda de Gahona, from Bluefields, who lost her son, a journalist shot dead while making his report; Jessica Patricia, from Rivas, and Lizeth Dávila, from Managua. They are all part of the Mothers of April Movement.

Aburto, 61, told END that she could not say goodbye to her son, Gerardo Aburto, 27 years old, when he left early to sell shirts in Managua. The Universidad Nacional de Ingeniería (UNI) had barricaded themselves in protest against the Government and when they passed through the area, Gerardo found death. He wasn’t protesting.

“The police killed him, when they came to disperse the kids there they beat him as they wanted, they left him in his underpants and they shot him to kill, he took two shots,” says Demesia with difficulty, crushed by the crying in the small room of her house with a dirt floor and walls of wood boards, with her eyes fixed on her son’s face.

From the editor: From the Q, a Happy Mother’s day to all the Nicaraguan mothers in Costa Rica. For those have lost a loved one, our heart goes out to you.