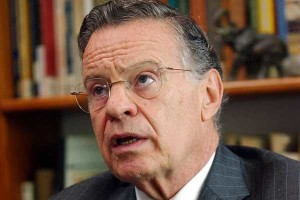 The Prosecutor’s Office alleges Rodríguez, before becoming president, in May 1998, “planned to distract and steal goods, money and services from a broker fund” of the Instituto Nacional de Seguros (INS) – state insurance.

The three are linked to the crime of “pecolado” (embezzlement), punishable with improsonment of three to twelve years.

Now it is up to a judge to analyze the evidence submitted by the Ministerio Público and determine whether the case goes to trial or dismissed for lack of evidence.

In the court filing, prosecutor Gisele Rivera Chacón alleges Rodríguez to have met with Acuña and Zawadski on several occasions before he was sworn in as president of the Republic on May 8, 1998.

The prosector alleges that the soon to be president told his consipirators that “he could not appear or be tied to the commissions that they were to recevie…and that they should confide in Rafael Sequeira Garza and Donald Murillo Pizarro, his trusted right hands”.

As part of the plan, according to the prosecutor, the involved took control of a cooperation agreement to train INS officials and, in parallel, created a training fund with percentages paid by various re-insurers operating in the world market.

According to the investigation alleged payments of up to US$2.1 million dollars were received by Rodriguez and others, the payments coming from an insurance company with offices in England and Mexico.

Rodriguez has said publicly saying that the charges are “a gross persecution”.

Rodriguez was forced to resign in 2004 from his post as Secretary General of the Organization of American States (OAS) to stand trial for corruption charges linked to the ICE-Alcatel case.

At trial, the former president was found guilty of receiving US$800.000 in payments from the French telecom Alcatel in return for being granted a license to install and operate the country’s first GSM network for ICE, the state telecom.

He was sentenced in 2011 to five years in prison, but the sentence was overturned, the appeals court citing statute of limitations and errors in evidence handling during the investigation.

QCOSTARICA - A moderate decline in new cases for the third consecutive week allowed the hospital system to avoid the dreaded collapse and rapid...
Politics