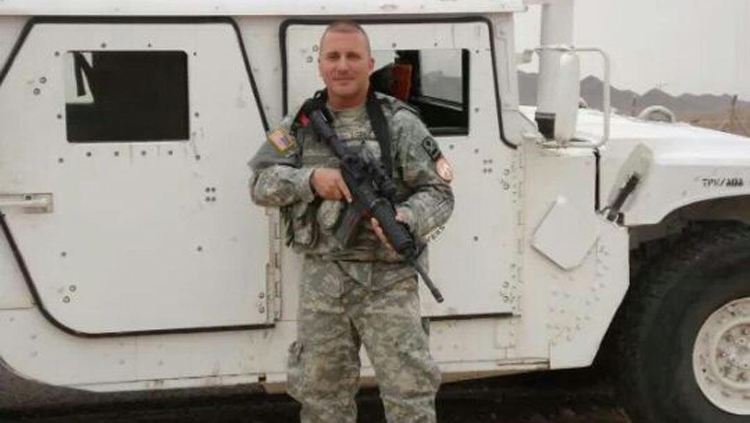 “The phone rang about 3am (Thursday), the caller asking me if knew him and then they told me what had happened. I froze, I could not believe it”, Kimberly told La Teja.

According to Kimberly she and Ivan Lopez were a couple. Kimberly told La Teja that the two had met online, meeting on Facebook where they “clicked” instantly.

The young single mother says they had an online relationship, “novios” (boyfriend and girlfriend) and that Lopez had planned on marrying her, in Costa Rica, when his nine month tour of Afghanistan was over.

Kimberly says the last time she spoke to Lopez was on Tuesday, but he never hinted what he was about to do only a day later.

“He spoke about problems with his boss, about not wanting to go to Afghanistan. I found it strange that he didn’t call me that day (Wednesday)”, Kimberly narrated.

The Tica girlfriend says the two had plans to marry, that Lopez had initiated divorce proceedings in the U.S., though not sure at what stage, only that she was expecting to receive some documentation.

Kimberly says that Lopez was planning on visiting Costa Rica after his tour ended in Afghanistan. “He wanted to visit every corner of the country, we would get married and then would move, with my son, to the U.S.”, said Kimberly.

In the U.S. media, Lopez is being descrined as an average Joe, ‘laid back’ but had personal turmoil recently. Reports say Lopez was initially angry that he was not given permission to attend his mother’s funeral, but had been given a 24-hour pass to attend. He may have also been feuding with another person at Fort Hood who may have stolen from him.

The New York Daily News says: Across 34 unexceptional years, Ivan Lopez was many things: A high school drummer. A loving father and devoted son. A small-town guy. A U.S. Army soldier and native Puerto Rican. But until he opened fire on his Fort Hood comrades with a Smith & Wesson .45-caliber handgun, there was hardly an inkling that the Average Joe was about to turn public enemy.

“He seemed like a nice guy, a family guy,” said Abel Quintero, 21, who lived near the Texas apartment shared by Lopez, the soldier’s wife and their 3-year-old daughter.

“He looked regular to me. Not crazy or nothing.”

On Thursday, Army investigators had more questions than answers about the bloody rampage in which Lopez killed three soldiers and wounded 16 in the second Fort Hood shooting spree in five years.

According to military officials, Lopez was a specialist assigned to the 13th Sustainment Command, a logistics and support unit at Fort Hood.

USA Today reports that, according to Army Secretary John McHugh, the soldier saw a psychologist last month and was given Ambien for a sleeping problem.

Lopez, his wife and their young child moved to the Killeen area, where Fort Hood is located, in February. Prior to the move, the family lived at another Texas military base, authorities said. The Quail Circle apartment Lopez lived in is approximately two miles from the military post, where authorities say he gunned down three people and wounded 16 others before committing suicide.

Authorities said the shooting spree began at approximately 4 p.m., Wednesday, in a medical brigade building. The gunman shot several soldiers there before targeting additional military personnel in another building. The shooting spree ended after roughly 15 minutes when a female military police officer confronted the shooter, prompting him to turn his .45 caliber Smith & Wesson pistol on himself, military officials said.

Fort Hood is the site of the worst ever mass killing at an American military installation.

In November 2009, Nidal Malik Hasan, a U.S. Army major and psychiatrist, fatally shot 13 people and injured more than 30 others at the base before he was shot and taken into custody. Hasan, who is paralyzed from the waist down as a result of his injuries, was later found guilty of 13 counts of premeditated murder. He was sentenced to death.

“Obviously this reopens the pain of what happened at Fort Hood five years ago,” President Barack Obama said in a Wednesday evening press briefing. “We are heartbroken that something like this might have happened again. I just hope everyone across the country is keeping the families and the Fort Hood community in our thoughts and our prayers.”

A motive in Wednesday’s shooting is not yet known, according to Lt. Gen. Mark Milley. Authorities have found no terrorist affiliations and suspect the shooter acted alone.

“We do know that this soldier had behavioral health and mental health issues and was being treated for that,” Milley said at a Wednesday evening press conference.

QCOSTARICA - Costa Rica's legislature approved, in the first debate, a bill that reduces the minimum amount that a foreign pensioner or rentier must...
El Salvador