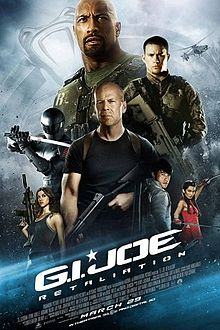 It is a sequel to 2009’s G.I. Joe: The Rise of Cobra.The film was written by Zombieland writers Rhett Reese and Paul Wernick. G.I. Joe: Retaliation features an ensemble cast, starring Bruce Willis and Dwayne Johnson, with Channing Tatum, Arnold Vosloo, Ray Park, Jonathan Pryce, and Byung-hun Lee reprising their roles from the first film. The film was released in North America on March 28, 2013.

Review: It’s an exercise in futility

Many believe that hiring Dwayne Johnson aka The Rock, to star in 2011’s ‘Fast Five’, was the genius idea that salvaged a flagging franchise. The same trick, however, doesn’t work for ‘GI Joe: Retaliation’ which, as it turns out, is even more awful than 2009’s disappointing ‘GI Joe: Rise of the Cobra’.

While you can’t really be surprised by the absence of compelling characters or the lack of emotional depth in the story – given that the GI Joe films are based on a kid’s toy – there’s no excuse why Retaliation is such a dull enterprise, or why it doesn’t even deliver a sense of guilty pleasure.

But, don’t take our word for it, see it for yourself at: