Getting Back To Normal That Will Never Be The Same; Death Toll Now 10

Q COSTA RICA NEWS – Costa Rica continues with a RED ALERT in seven cantones (counties): Upala, Bagaces, Guatuso and Los Chiles in the north and Golfito and Corredores in the south, in the aftermath of Hurrican otto.

While, two cantones, Osa and Coto Brus remain in YELLOW ALERT, the Greater Metropolitan Area (GAM) was left out of the alerts, given that it was practically felt no effect of the hurricane, while the rest of the country has in the GREEN. 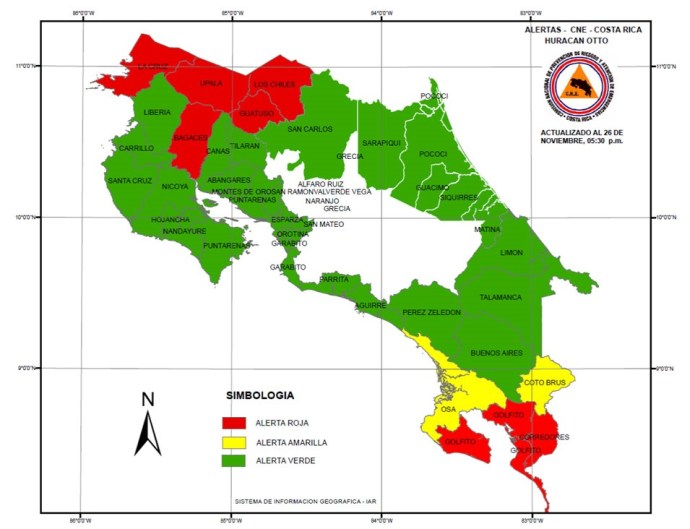 The RED and YELLOW alerts allow the use of government resources to restore public services and return the more than 6,000 evacuated to their homes.

The state of the emergency:

– There is significant damage to homes, schools, electricity, water distribution systems, damage to dikes, riverbeds, agriculture and other protected areas.

– 2,778 kilometres of road surface was, including a number of bridges.

–  Currently 30 shelters continue to operate and bring relief to 3,419 people: 4 in Corredores and 7 in Golfito, in the southern zone; 1 in Bagaces, Guanacaste; 17 in Upala, in the northern zone; and 1 in Matina, in Limon.

The Red Cross (Cruz Roja) has been active in receiving and collection donations of non-perishable foods, toiletries and sundries and cash.

A number of supermarkets and retail stores have also taken up collections, almost impossible to visit an major retail store and not find a donation box.

Last night, outside the National Stadium, a collection point was set up to accept donations from the thousands of Guns ‘n Roses fans.

Important to note is that the Cruz Roja is the only authorized entity to coordinate and distribute all donations.

QCOSTARICA - The news of the reinstatement of the...
Cine (Movies)