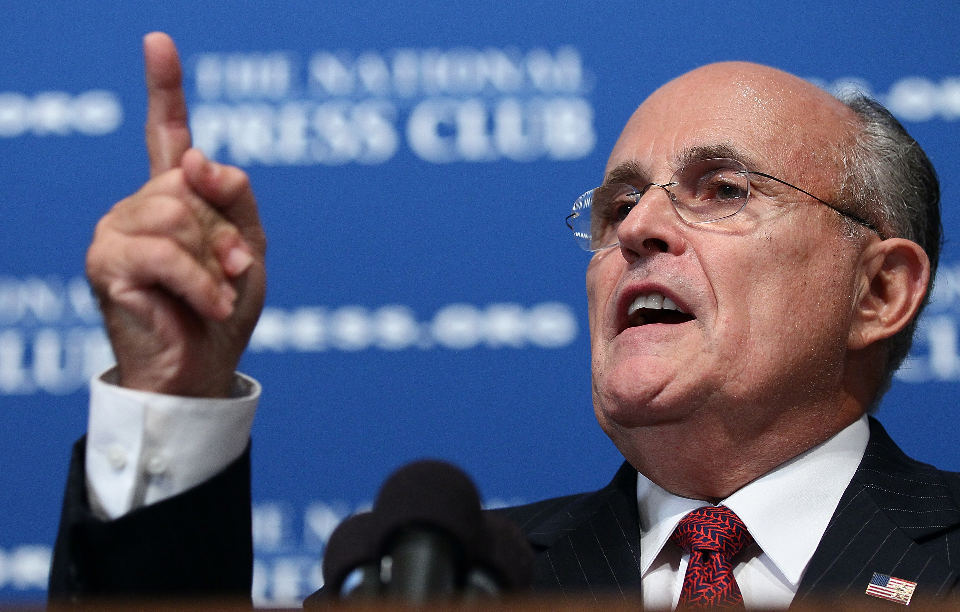 CENTRAL AMERICA – Rudy Giuliani — the former New York City mayor touted as the mind behind a dramatic drop in crime in that city in the 1990s — is offering some well-compensated advice to some of the poorest, most violent countries in Latin America, but his crime-reduction theories are based on a dubious concept and can be counterproductive.

In October 2014, the former New York City mayor — who had been hired by Guatemala’s business community — visited Guatemala to discuss the results of a four-month study by his security firm Giuliani Partners LLC on the country’s security conditions.

Giuliani will be returning to Central America this year to advise Honduras on how to manage insecurity and violence.

Giuliani has also done consultancy work in Colombia and Brazil, where he traveled to Rio de Janeiro to help the city improve security in anticipation of the 2014 World Cup and 2016 Olympics.

The former mayor is uniformly received like a rock star, and his crime-fighting wisdom is treated as gospel, however shallow and rudimentary it is.

“For us the number one priority was security,” Giuliani told the Guatemala crowd of his time as New York City mayor. “When you have a tremendous amount of crime in your society, you are not going to solve it with schools, libraries, nice neighborhoods and sports teams. You have to emphasize law enforcement. As soon you get the crime down, the next thing you do is build up the social programs. That’s when you create more jobs, better neighborhoods, better schools.”

Giuliani left Guatemala with recommendations on how to better measure the effectiveness of its police and justice system, and thus determine how many police were needed and how high their salaries needed to be in order to cut back on corruption.

In El Salvador, the president of the organization who invited him said he was confident the firm’s proposals would “break the circle of violence,” and added that he hoped the government would give full consideration to Giuliani’s formal recommendations, which are expected in early April.

Central America needs help. The Northern Triangle region — Guatemala, El Salvador, and Honduras — is one of the most dangerous and violent regions in the world. In 2014, Guatemala’s homicide rate stood at 31 per 100,000, while both El Salvador and Honduras had rates of over 60. Much of this violence is the result of widespread gang activity and drug trafficking through the area.

Such levels of violence have taken a large financial toll on Latin American economies: violence in Honduras cost the country an estimated 19.2 percent of its GDP in 2013. Rampant insecurity is also seen as one of the primary factors motivating Central American youths to make the dangerous trek north to the United States.

But there are numerous problems with the former mayor, beginning with his credentials. Statistics show violent crime and homicides started to drop prior to Giuliani’s administration. Indeed, during the 1990s, crime did not only fall in NYC, but in major cities throughout the United States, including Chicago, Los Angeles, San Francisco, Miami, and San Diego.

Many observers also cite a complex mix of social and demographic changes for New York City’s crime drop, namely: the end of the crack cocaine epidemic, an improving economy, and increased prison terms for criminals. All of this suggests Giuliani was less “supercop” and more the beneficiary of circumstance: he was simply in the right place at the right time.

There are also major problems with Giuliani’s core concept. Known popularly as “broken windows,” the theory — first introduced by college professors George Kellog and James Wilson in 1982 — suggests police can make areas safer by cracking down on minor “quality-of-life” offenses, like vandalism or panhandling, on the assumption that strict enforcement of the law against petty crime will prevent more serious crime from taking root.

In addition to just how ridiculous this sounds in places with homicide rates six times what New York City had at its worst, there are serious doubts about the effectiveness of “broken windows” policies — and concerns they have led to abuses by police in New York — which should give Central American governments a degree of caution in adopting his recommendations.

Randall Shelden, a criminologist at the University of Nevada, Las Vegas, said in an e-mail to InSight Crime that “the so-called ‘broken windows’ idea is based upon a bad theory or no theory at all,” and that “hardly any credit should be given” for Giuliani’s “broken windows” approach.

Robert Gangi — a criminal justice and law enforcement expert who served as the Executive Director of the Correctional Association for over 29 years and founded the Police Reform Organizing Project (PROP) — told InSight Crime that “no credible research has proven that broken windows in New York City is an effective crime fighting strategy.”

Instead, Gangi said a variety of factors were responsible for NYC’s crime drop. In addition to reasons mentioned earlier, these include the stabilizing effect immigration had on poor neighborhoods, the eventual resolution of the drug war, and what he termed the “little brother syndrome” — younger generations avoiding drug use after witnessing its ill effects.

Gangi added that “cities all over the world have seen a significant decline in crime, even those who did not employ a broken windows strategy.” The expectation, he said, that crime will drop by listening and employing Giuliani’s approach is a “theory built on sand.”

Enacted in the early 2000s to deal with the rise in street gang activity, mano dura involved large police sweeps in marginalized areas and the indiscriminate mass arrests of suspected gang members based on clothing and tattoos. These policies led to mass incarceration but have been ineffective at reducing crime and violence. Some studies even suggest they have actually worsened gang activity and InSight Crime has found they have helped the gangs reorganize, regroup, and recruit in the jails.

In contrast to Giuliani, Gangi said there is a basic wisdom to apply in order to combat crime and violence that involves providing support and opportunity for people who, for one reason or another, have become marginalized. For these people, crime can become a way of life, or simply serve as a means to make a livelihood.

This means governments should aim to provide job training, after school programs, improved education, and an end to aggressive and discriminatory policing. For his part, Shelden questioned how Giuliani would achieve this in Central America, since providing “security” — which Giuliani explicitly stated during his visit to Guatemala City as his number one priority in New York City — means “doing little or nothing about the causes of crime.”

While “broken windows” policing continues to have its defenders, Giuliani himself has somewhat retreated from the universal applicability of his policies, acknowledging that what worked in New York might not work in Guatemala.

Indeed, the differences between New York under Giuliani and Central America today are vast: Giuliani’s New York lacked the same crippling levels of poverty, extensive gang activity, and large-scale drug trafficking. Perhaps more importantly, however, the countries that make up the Northern Triangle collect hardly any tax revenue, meaning that funding for any of Giuliani’s recommendations — such as increased and better paid police — will be hard to come by and the institutions one might use to apply justice are chronically impoverished.

Central American government and business associations would do well to talk to others who have hired Giuliani before they proceed. In 2003, Giuliani presented a 146-point plan on reducing violent crime to government and business leaders in Mexico City. Then Mexico City police chief Marcel Ebrard said he would follow every one of the recommendations, yet the following year crime dropped by just one percent. This led many skeptical officials in Mexico City to criticize the work of Giuliani’s firm, with new police chief Joel Ortega saying, “I am no fan of Giuliani.”