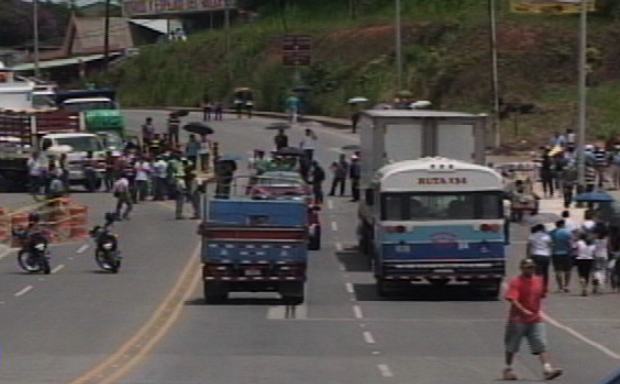 Since early Tuesday, proucers of bean and corn from different areas of Pérez Zeledón an Buenos Aires de Puntarenas began a blockade of the Interamericana Sur (Ruta 2), the main road to and from San José and the Panama border.

The blockage is mainly centred in the area of the Río Jilguero.

Trucks in the middle of the roads, slowdowns of traffic on alternate routes and people all over, the domestic producers are demanding that the government listen to their concerns.

The group of farmers, who maintained their blockade through the night,  and despite the police action to disperse the protestors, they say they will not move until government officials arrive in Pérez Zeledón an open a dialogue.

Gloria Abraham Peralta, the minister of the Ministerio de Agricultura y Ganadería (MAG) says she will not negotiate while the protests continue.

According to the producers, their protest is that they have been abandoned by the authorities of the MAG since the beginning of the government of President Laura Chinchilla.