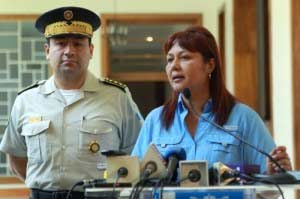 Q24N – (Prensa Latina) Guatemala”s Interior Minister, Eunice Mendizabal, denied that the prison where former President Otto Perez Molina (2012-2015) is held today is a luxury prison as some media press suggested.
According to the minister, the former president, subjected to trial for several crimes related to a corruption scandal for the fraud of customs in this country, share a room and is just in the worthier conditions than those that the former Matamoros barracks

The prison, located at the Mariscal Zavala Military Brigade, is not a luxury prison, she said, regarding to the new prison, which features open-air spaces, ground to play soccer, freshly painted modules, colorGUATEMALA-PRISONful tile floors, as well as well-conditioned parking lots for visitors.

He also stated that no prison can be considered as a rest house, although she admitted that Perez Molina shares a room with three people, has basic services, and is in better conditions than he was in the Matamoros barracks.

“Under no circumstances, it can be regarded as a privilege,” Medizabal stressed and brandished the first day the former president and other prisoners arrived in the Mariscal Zavala Military Brigade, slept on mats, because the prison system had no resources to cover basic needs.

“We want to dignify those people because although they have lost their freedom, it does not mean they have lost their minimum rights,” the Guatemalan interior minister said, where criticism of overcrowding, poor infrastructure, violations of human rights and other abnormalities in almost all prisons, are frequent.

According to the National Economic Research Center (CIEN), more than 19,628 prisoners cohabit in the 22 existing prisons, although those centers have hardly capacity for 6,412, which means an overpopulation of 280 percent.

Today, Saturday, June 12, only ODDS can circulate. The measure is countrywide and applied between 5:00 am and 9:00 pm, save for those under the...
Environment

QCOSTARICA - Costa Rica will have a system called "Interceptor" that will eliminate floating and suspended waste from the upper layer of its waters,...
Politics