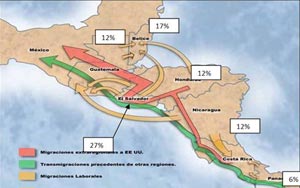 Q24N – (Prensa Latina) Central America, for its geographic condition, its economic development and the own history of the region is ohne of the zones of the planet where the migration phenomenon is more evident.

The isthmus is not only a migration corridor, mainly from south to north, but from its countries are considerable the movement of persons seeking new life opportunities.

Causes are many and go from the lack of sustained economic development, social and political instability, civil wars, insecurity until mirages such as the so-called American Dream in the United States.

About 200 thousand Central Americans try to cross every year the border of Mexico in their route to the United States and a great amount of them are unaccompanied children.

In the dangerous trip they are stalked by organized crime, extorsions, the same antimigratory policies of the U.S., physical lesions, robbery, murder, accidents by falling off trains transporting merchandise, sex abuses and at the end, probable deportation.

In November last year, ex President of Guatemala Otto Perez Molina, the head of Honduras government, Juan Orlando Hernandez and of El Salvador, Salvador Sanchez Ceren, together with U.S. Vicepresident, Joe Biden, presented the Plan of Alliance for Prosperity of the Northern Triangle at the Interamerican Development Bank (IDB) headquarters.

The plan, questioned by many analysts emerged to solve the crisis of migrant children offers to promote development, economic growth and security in the region to prevent illegal emigration.

The initiative is the answer to the meeting of three Central American presidents with their U.S. peer Barack Obama, three months ago in Washington, after the crisis unleashed by thousands of migrant minors detained in border migration points in 2013 and 2014.

The United States, the IDB and the World Bank committed to finance the plan, among other international actors, in addition to the resources contributed by the three governments.

However, for Guatemalan economist and journalist Luis Solano, the proposal tends to become a new private investment project, aimed at consolidating the most powerful economic groups which could lead to new migrant waves, such as it increasingly has been happening over the last 40 years.

The recent migration wave of some three thousand Cubans to the United States by the Central American corridor and stranded in Costa Rica, led to an extraordinary meeting in El Salvador of the Central American Integration System (SICA in Spanish) plus Cuba, Ecuador, Colombia and Mexico, evidenced another edge of the problem.

In the SICA meeting plus four, the foreign ministers rejected unanimously the Cuban Adjustment Law and other regulations that promote illegal emigration of Cubans to the United States.

In statements to Prensa Latina, the Salvadoran Foreign Minister, Hugo Martinez, described as discriminatory such policy regarding other migrants (Cuban Adjustment Law, the Dry Feet-Wet Feet policy and the Program Parole for Cuban Medicine Professionals).

He underlined such regulations do not apply to migrants from Central America, and reiterated the nations attending the meeting are ready to contribute to a way out of the situation of some three thousand Cuban migrants.

“There is a structural problem on which we called the attention of the United States and the rest of the countries of the region, that it is necessary to apply similar standards and offer the same facilities to all,” he stressed.

Although Costa Rica insisted on making Nicaragua responsible for not opening a humanitarian corridor, Managua sustains that accepting this would legitimize “an insecure, undignified and disorderly migration that affects Cuba and is already hitting the Central American region.”

At the end of the meeting the Salvadoran foreign minister explained the SICA members will announce “unilaterally” the measures they will take to solve the problema created over the last days and showing other aspects of the problem.

The migration movement in the region is today more than an issue derived from traditional poverty and lack of opportunities, to become a business with economic and political tentacles which may convey other threats as destabilization of countries and the region by exacerbating differences.

QCOSTARICA - The United States presented on Monday a plan to...
Read more

QCOSTARICA - Characteristic of the rainy season, we will see rain in the afternoons and nights in the Central Valley, the entire Pacific coast,...
Politics

QCOSTARICA - President Carlos Alvarado said he has all the confidence in his Minister of Public Works and Transport (MOPT, Rodolfo Méndez Mata, and...
HQ