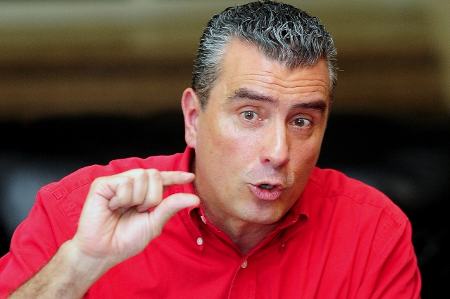 The proverb ‘If at first you don’t succeed, try, try, try again’ popularized by Thomas H. Palmer could not be more accurate when describing the tenacity of the founder of the Partido Movimiento Libertario (ML) – Libertarian Movement – Otto Guevara.

Guevara, has on three occasions made a bid for the presidential chair. And in all three occasions lost. But that doesn’t mean he is giving up, no sir, it appears he will be in for a fourth run.

Guevara is the only aspiring candidate for the ML presidential candidate nomination for the 2014 elections. The party is holding its convention today and is expected to officially name Guevara their man.

However, Guevara is playing down the role. In an interview with El Financiero last week, he said that the probability of he will be running in 2014 is at 60%. Since, no one has come forth to enter the nomination race.

In the 2010 election, the Guevara and the ML campaigned for change. For 2014 it appears the party will again be calling on Costa Ricans for a change in leadership, to drop their support for the Liberacion Nacional (PLN), as the country is in urgent need of change.

Without a question the PLN has been politically a powerhouse. In the years past the PLN alternated the country’s presidency with the PUSC party, which was decimated in 2006. If the PLN wins the 2014 it will be three consecutive leaderships.

And that seems to be the basis for Guevara’s call for change.

Guevara, as a pre candidate, points out the current situation with respect to unemployment, the cost of living and the lack of basis services.

One of the major issues that could be faced by all presidential candidates is the San José – San Ramón road reconstruction.

Guevara is maintaining the line that the road should be built nationally and take advantage of the proposal by the state insurer, the Instituto Nacional de Seguros (INS) to finance the work.

QCOSTARICA - The second week of September started with...
Health