Health Is Looking To Prohibit Smoking in Boulevards

Having to endure breathing second hand cigarette smoke in San José’s boulevard may soon be a thing of the past, as the Ministry of Health is reforming the Anti Tobacco regulations. 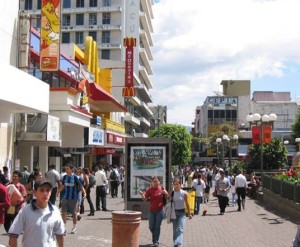 According to Dr. Juan de Dios Rumoroso, there is  plan to set out smoke free or “green” zones that include boulevards (pedestrian pathways), prohibiting cigarette smoking and setting fines for transgressions.

The plan would also prohibit smoking in industrial areas, with cigarette smokers having to respect a distance of at least three meters (10 feet) from doors of establishments.

The regulations, if adopted, would require smokers to find remote areas to feed their habit, smoking in areas that do not affect anyone.

The challenge faced by Health officials is enforcement.

Rumoroso is of the opinion that “it is the duty of all Costa Ricans not to smoke in places where it affects others and business and organizations to ensure the law is enforced”.

Finally,  Dr. Roberto Castro of the Vigilancia de la Salud (Surveillance at the Ministry of Health) says that although smoking is prohibited in parks, the city of San José has not wanted to put up signs and as such many continue to smoke there.

Today, Friday, June 11, only EVENS can circulate. The measure is countrywide and applied between 5:00 am and 9:00 pm, save for those under the...
Quepos

QCOSTARICA - Costa Rican President Carlos Alvarado is just another citizen when it comes to covid-19 vaccination, given his young age and good health,...
Economic Recovery

QCOSTARICA - Do you need a certificate of the COVID-19 vaccines applied in Costa Rica?  People who require a certificate that certifies the receipt...
Travel