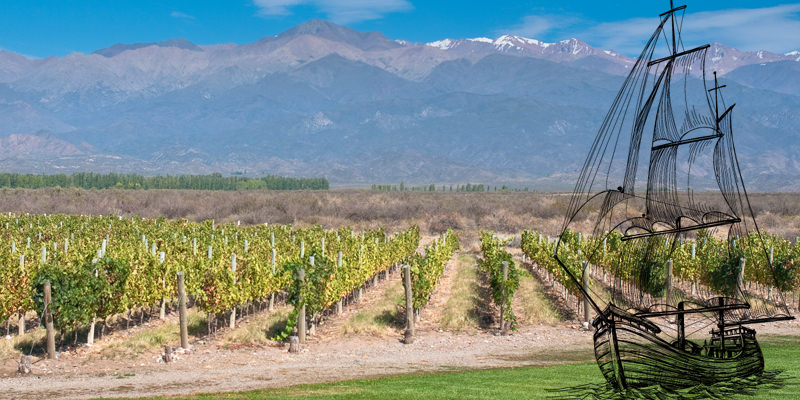 Since the beginning of the twenty-first century, Malbec has become one of the most popular wine imports to the American market. I had a wine shop from 2007 until 2013 and for a full seven years every time I looked at my sales Malbec always came out on top.

The wine is easy on the nose and the palate with its dark color and buoyant fruit balanced by soft tannins. It has a tendency toward high alcohol, yet its velvet-like texture has stolen the hearts of North American wine drinkers.

It’s also very easy on the wallet, with a dizzying range of prices from a dangerously low $2 to upwards of $300 plus. That’s crazy, but makes sense. When a wine gains in popularity with such rapidity the mass market tends to latch on.

The Malbec we know and love comes to us from the cone of South America, primarily from the country of Argentina. And for many, the story of this grape starts and stops there. Malbec is an Argentine grape right? Well yes and no. In fact, Malbec has its beginnings in medieval France.

Before Bordeaux became the focus of English wealth, it was the wines of Southwest France that were all the rage. During the Middle Ages England funneled much of its monetary investments to Southwest France, helping to develop wine trade along the rivers leading to the Atlantic. The popularity of these wines were solidified by the various seats of power throughout this time, from Eleanor of Aquitaine to Louis XV. By the fourteenth century one of the most popular wines consumed by British aristocracy was what they dubbed the “dark wine” due to its dark inky color and depth of fruit, made from a local southwestern grape known as Cot. Although grown throughout southern France and even in Bordeaux and the Loire Valley, it was in and around the little commune of Cahors on the River Lot, a tributary of the Garonne, that the grape thrived.

This was the time of the Knights Templar, stationed just to the north in La Rochelle, the age of the adventures of Alexander Dumas’ D’Artagnan and his three musketeers and of course many battles, as superpowers vied for land and port control. Much wine was consumed in the exploits of Porthos, Athos and Artemis and save for a specific reference to a poisoned wine from Anjou, you can bet the majority of cups were filled to the rim with the “dark wine.” Alas, the hold on the trade this wine had was not meant to be.

The nineteenth century saw the rise of Napoleon III and his eyes were trained on Bordeaux. The 1855 classification of Bordeaux brought this wine growing region into prominence and prestige and with its convenient location just off of the Atlantic, the wines of Southwestern France were all but forgotten, in trade that is. And although the little Cot grape was grown on the banks of the Gironde estuary and was used as a minor blending agent in the now prized Bordeauxs, it did not flourish as it did to the south. In Bordeaux it made wines that were a little too rough around the edges and it began to be used less and less. It even gained the nickname Mal Bouche – French for bad mouth – on account of its harsh characteristics. But this mal bouche grape would come to be known in Chile as Malbec and in 1877 when the phylloxera louse invaded Southwest France, Cot didn’t stand a chance and all but disappeared from land under vine in France.

But all was not lost. Prior to the Phylloxera epidemic, in 1840, Malbec, as it was initially known, had made its way to Chile. After gaining independence, the Chilean ruling class looked to France for inspiration when creating their new national framework and that included the creation of a wine industry. This brought French agronomists to South America with vine cuttings in tow, Malbec being among them. Agricultural departments were formed and French expats, some of them exiled by coup d’etat by Napoleon III, set to aid in developing Chilean viticulture.

Across the border Argentina was also experimenting with Bordeaux varieties under vine, primarily growing what they called the “French Grape,” their term for Malbec, and that experimentation concentrated in and around the town of Mendoza. But the country was still in the throes of a revolution and even after independence there were several years of civil war. Yet Malbec thrived here in the irrigated plains of Mendoza. It took incredibly well to the climate and soil compositions of the land. As Argentina worked its way to stability, the country, Mendoza specifically, became what is now known as Malbec’s spiritual home.

In 1853, French Agronomist and coup d’etat exile Michel Aime Pouget moved to Argentina after a decade in Chile helping to develop their agriculture, to head the newly minted Argentinian agricultural department. He brought with him a bushel of different vine cuttings including Cabernet Sauvignon, Merlot and of course Malbec. Of all of the cuttings, local vintners were most enthusiastic about the Malbec grape because it seemed like the grape was meant to be there all along.

By 1962, there were almost 60,000 Malbec vines planted in Argentina and the grape gained in national popularity. But again the country saw a few more decades of political unrest which caused severe reduction in plantings. Yet, just as before, the wine industry bounced back in the 1990s and this time chose to focus on Malbec as the primary strain.

Now things started moving fast. In 2000, Malbec had over 16,000 hectares planted in Argentina and in only nine years it jumped to over 28,000. It’s been increasing ever since. So is Malbec an Argentine grape? Yes. But its French personality is also thriving again in the appellation of Cahors due to the North American market taking a liking to what has been happening in Mendoza. Everything has come full circle. So go out and grab a Cot from Cahors and a Malbec from Mendoza, cook up some lamb, put them side by side and let me know what you think.

- Advertisement -
Paying the bills
Previous article‘Crime without Punishment’: Brazil’s Massive Contraband Trade
Next articleMAP: The Most Popular Beer In Every Country

QCOLOMBIA – If you send a bouquet of roses for Valentine’s...
Read more

Where can Americans currently travel to in Latin America?

The world isn’t as open to US citizens right now as...
Read more

QCOSTARICA - Thursday morning, in an act full of...
News