“I will draw what I think I should draw.” Satire against the regime without giving up despite the Gag Law 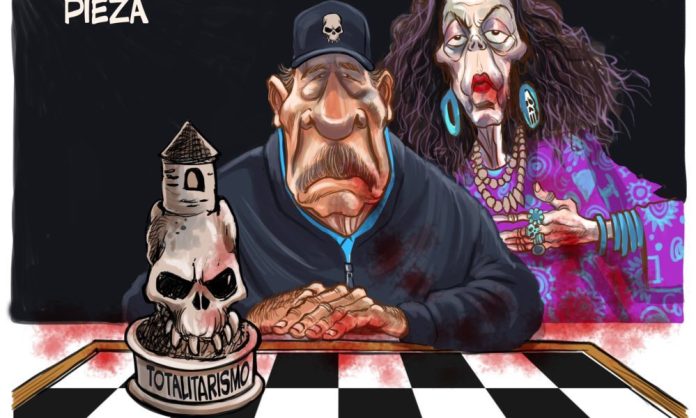 TODAY NICARAGUA – The word “hate” formed with the faces of Daniel Ortega and Rosario Murillo, a music video in which citizens show their rejection against the Ortega dictatorship and an obscene and irreverent gesture, were just some of the responses that cartoonists and content generators gave to the Special Cybercrime Law or Gag Law (Ley Especial de Ciberdelitos o Ley Mordaza), approved on October 28 by the Sandinista steamroller of the National Assembly.

Cartoonists Pedro Molina and Cako Nicaragua and the content generator identified on Twitter as “El Rey Mapache or Mapache Jambado” are some of the personalities who make political satire and say that despite this Gag Law they will continue to denounce, through their trenches, human rights violations committed by the Ortega administration. The cartoons, videos and memes have been a form of expression that makes the dictatorship uncomfortable, therefore artists also feel threatened by this Law.

Manuel Guillén is also one of the cartoonists who has been characterized by scathing criticism of the abuse of power and corruption in different governments, and that his way of opposing continues to be his cartoons, also published in La Prensa.

The Gag Law establishes from one to 10 years in prison for citizens convicted of cybercrimes, including publications on digital platforms and in the media that threaten the sustainability of its totalitarian system for the dictatorship.

The approved Law states that it has the objective of “prevention, investigation, prosecution and punishment of crimes committed through technology and communication, to the detriment of natural or legal persons, as well as the comprehensive protection of the systems that use said technologies, its content and any of its components”.

In the opinion of El Rey Mapache, this Law, although it is true is aimed especially at journalists and the media, also “is going to take in the sack” anyone who does not agree with the regime.

The content generator emphatically assures that it will continue to denounce the regime through its videos and memes, although it acknowledges that it is afraid of the danger that this measure imposed by the dictatorship represents.

“The truth is that in the first days I was flooded with fear, it is the most human thing, even though I am a Mapache I have feelings and the first thing I feel is fear. At this point you can no longer silence people, or try to cover the sun with a finger, so there was a fear at the beginning but after thinking about it I thought that I cannot give them the pleasure of silencing myself. At the beginning I thought ´well no way, to lower the gas ´ but it is impossible to shut up, the indignation that I have stuck since April 2018 is too much,” said El Rey Mapache in an interview with LA PRENSA.

More than 600 cartoons against the dictatorship

Cako Nicaragua is another cartoonist who, as a result of the socio-political crisis that began in April 2018, has shown his rejection of the Ortega regime through his cartoons.

He has been continuously publishing his drawings on the digital platform Article 66 for more than 600 days, “criticizing Moors and Christians,” says Cako, who claims to be very clear about “what is the route and the final enemy.”

However, with the approval of this law, he assures that he is forced to redouble his efforts.

The cartoonist was recently awarded by the Violeta Barrios de Chamorro Foundation, with the best digital cartoon. In it, he portrayed the hands of Vice President Rosario Murillo weaving a mask as a symbol of more censorship, precisely because of the Gag Law.

Cako told LA PRENSA that from now on he will be more careful and somehow “avoid falling into those ambiguities that the Law mentions, making a humor not so acidic.”

“I felt the fear from the moment I started to publish my cartoons, there is always a fear, it is normal like anyone who does critical work because no one wants to be imprisoned or besieged, but fear will not stop me to continue doing my job. It occurs to me to start making vignettes without signing, to change the style, although it is taken into account that it is a pseudonym because no one knows Cako, it is better to be more careful with this Law,” he said.

On that point, of not signing the vignettes or using a pseudonym, for Molina this alone is a small but powerful indicator of the erosion of freedoms in Nicaragua.

On a personal level, the artist ensures that he will always continue to sign his drawings. “My cartoons bear my name, my section within Confidencial as well. My social networks too. No. I have not considered changing that. As for the content, I will draw what I think I should draw as it has been up to now,” he concluded.

- Advertisement -
Paying the bills
Previous articleCOVID-19 in Costa Rica: Intense scolding (regañazo) from the Minister of Health
Next articleOrtega no longer has fresh petrodollars from Venezuela. And now what?

UN denounces a long list of irregularities in the Nicaraguan elections