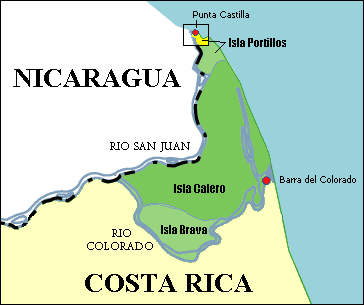 The International Court of Justice at The Hague has notified Costa Rica and Nicaragua that it forbids either country to place people in the disputed border zone. The decision arose in the aftermath of Nicaragua´s brief invasion and occupation of a strip of Calero Island on the south bank of the San Juan River. 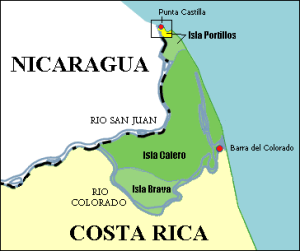 The March 8, 2011, International Court decision calmed a tense situation after Costa Rica had filed a complaint and Nicaragua counter charges. Individuals have since filed for the Court to change its decree.

The Court has made no further rulings on the border situation. Both sides have accused the other of environmental damage from Nicaragua’s dredging of the river and Costa Rica during the construction of a hasty 160-kilometer road on the southern bank of the San Juan.

But the Court ruled that relaxing the decree would increase “risk of incidents susceptible to aggravating the present dispute.” Nicaragua had argued that the incursion of armed troops on the river island was in response to narcotics traffic along the border.

In July of 2009, the Court reaffirmed Nicaragua’s sovereignty over the river but also recognized Costa Rica’s rights to navigate the waterway. All this has played out against the desire of the Nicaraguan government to built an ambitious inter-ocean canal using part of the river.