‘We don’t deserve to live like this!’ – Miguel Pizarro, 29, opposition lawmaker 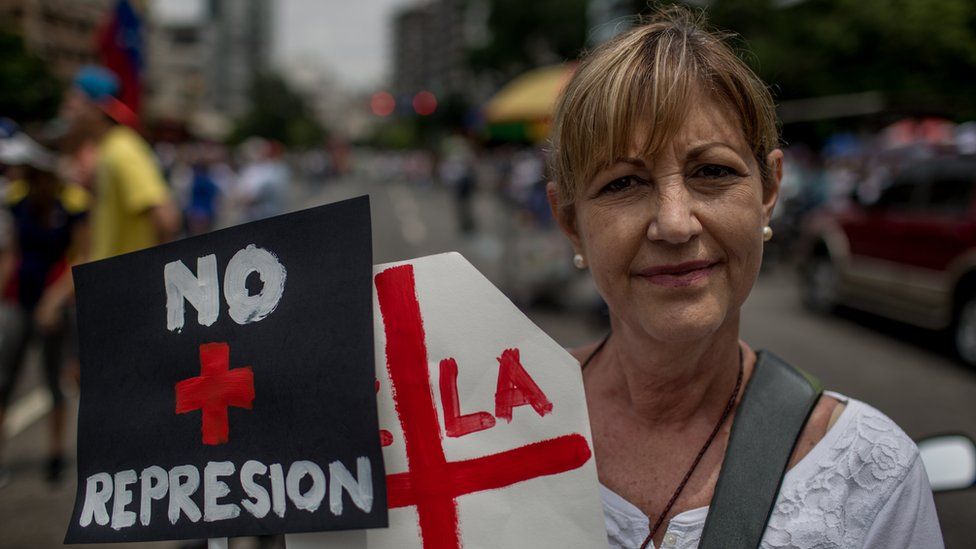 Venezuelans angry with the government of President Nicolas Maduro have been taking to the streets almost daily since the beginning of April. Despite dozens of people being killed in protest-related violence, the demonstrations show little sign of abating.

(BBC News, Caracas) Here, demonstrators explain their reasons for protesting, and what they hope will come out of their efforts.

On top of that you have shortages of medicines, of goods.

This crisis is affecting my entire family. We have gone from being middle class to being much lower down.

Every day we’re worse off and our children don’t have a future. They’re killing our children [at the protests].

I’m on my 32nd day of protest. I’ve been here every day, resisting.

I’ve been unemployed for two months because of the situation this country is in. The firm I used to work for left Venezuela.

I have two children. Now I do “bachaqueo” [buying and selling goods on the black market] to feed them.

We’re here to put an end to the dictatorship in Venezuela, so that our children can grow up in a free Venezuela!

I carry a homemade shield on which I’ve painted the map of Venezuela. I wear a mask because the Sebin [Venezuelan intelligence service] is looking for us.

The police come to search our homes and take us away if they find us. They’ve already taken some of my friends.

‘We don’t deserve to live like this!’ – Miguel Pizarro, 29, opposition lawmaker

What drives me to protest is what’s happened to my sister. She is like a mother to me because she looked after me while my parents, left-wing militants, were doing their thing.

She was getting injections to keep it from growing. That medication was being produced here.

My sister’s tumour started growing again and left her paralysed.

In 2015, we decided as a family that we needed to get her out of the country.

She’s now living abroad in a tiny flat as an undocumented immigrant and we send her what we can so she can get the injections, which keep her paralysis in check.

I don’t want to continue living in a country where I can only see her on the screen of my phone because someone decided to siphon off the money needed to import medication.

When I wake up tired of protesting, I remember that day I waved her and my niece off at the airport.

You have to turn that pain into fuel, if you don’t, it will turn into hate, pain will turn into a wish for revenge, and I’d rather it was a fuel for change.

‘I don’t feel safe at the protests, but I have to be courageous!’ – Alba Fernández Torres, 74, medical doctor

I’ve been to all the protests so far and I will carry on going to all of them!

It’s risky, but if we want freedom for my country and for the children of this country, we have to take some risks.

My children, of course, worry about me but they agree with me. They say, “Carry on mum, we will, too!”

Despite my age I feel the duty and the moral obligation to give the children a free Venezuela, which I knew when I was a student.

I worked as an anaesthetist and as a doctor I can tell you the problems are numerous.

We don’t have supplies. When a patient is going to be operated on, the first thing he is given is a list of the medical supplies he needs to buy, no matter how much it costs, because the hospital has nothing.

I have bladder cancer and I haven’t been able to have my check-up, which was due in January, because there are no reagents.

My diet has suffered, too – now I don’t eat half as much of what I used to and it’s mainly carbohydrates. Where is the protein to give us energy?

I’m going to carry on protesting until that man [President Nicolas Maduro] leaves. I don’t want violence, but we’re going to get him out, of that I’m sure!

‘My mum was mad when I first went out to protest’ – ‘Pedro’ (not his real name), 18, high school student

We’re here to topple the government, one way or another. There are people dying of hunger, the currency has dropped in value, we can’t buy basic goods and there’s a lack of security, which is killing us.

My granny can’t get the medication she needs. And then, in January last year, my uncle was killed by criminals.

That’s when I decided to go out and protest, but I knew I wouldn’t be allowed to on my own. We talked about it at school one day and decided to all take to the streets together.

There are about 15 of us, all the same age, and we call ourselves Los Pedros. We don’t have classes at the moment anyway because of the protests so we may as well come here.

This is my fifth protest. Our parents know we’re here. They do worry, but we’re doing it for Venezuela!

We saw what happened with the protests in Ukraine and we think it can work here.

Article was originally published on BBC.com. All photographs by Alejandro Cegarra

Writing every day is not just good for your...
National