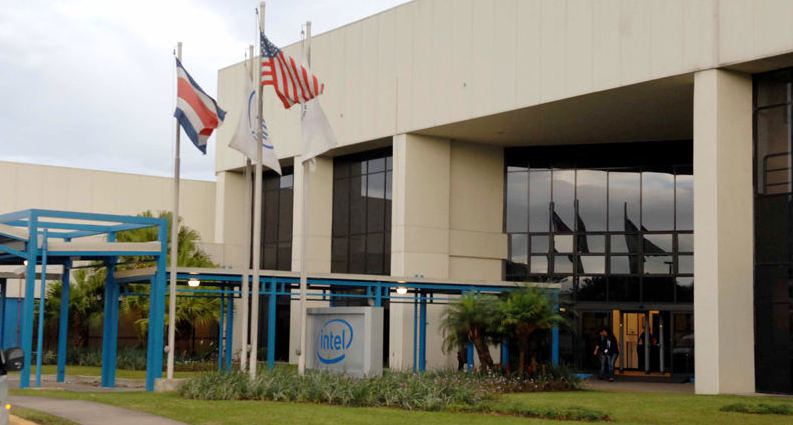 COSTA RICA NEWS – Those depressed by the announcement earlier this year of the closing of the assembly plant for computer chips and the loss of 1.500 jobs were heartened this week by Intel’s revealing plans for the opening of a mega-laboratory in the country to provide a proving ground for new products under development.

The announcement was made after it was revealed that President Luis Guillermo Solis had made an appeal to top executives of the technology giant. The layoff of 1,500 highly trained and skilled workers threatened to add to this country’s unemployment and add a heavy economic burden to the President’s already heavy cares.

The Mega Lab is a part of Intel’s Development and Engineering Center to employ some 700 workers as well as the Global Center for Shared Services employing 800. That will mean a payroll of 1,500 workers by the end of 2014 with a potential of further expansion.

Although the President made his announcement Tuesday, he knew the news as early as his meeting with Intel CEO Brian Krzanich Monday on his visit of Silicon Valley. President Solis had made the trip to the United States in promotion of new foreign investment accompanied by officials of the investment promotion agency CINDE and the export promotion agency COMEX.

In his visit to Silicon Valley, California, the President also explored possibilities of creating a special laboratory for small companies in the technological field in this country. The proposed lab would develop entrepreneurship, networking and sharing to information, all of which are sore needs for small businesses.

Although it may sound strange for a country whose cultural symbol is the oxcart, but Solis said the lab would make this country “a leader in attracting investment in high technology, innovation and research because it will be our professionals who will be responsible to evaluate products that Intel places on world markets.

“This operation reaffirms that this government is committed and proactive in generating employment of great value,” Solis added, “and demonstrates once again that they (native technicians) and Costa Ricans have the preparation and ability to carry world impact in operations of companies like Intel.”

It was last April 8 that Intel released the worrisome news that it was shutting down it microprocessor manufacturing operation here that employs 1.500 workers in a worldwide reorganization. The revealed that the layoffs would begin during six months with the plant completely closed at the end of this year.

At that time, they announced that they would still hire 200 high skilled technicians and would retain the 1,000 personnel at their engineering and research facility. The company had decided to move their computer chip manufacturing closer to developing markets in Asia.

The President made his announcement with his new Minister of Foreign Trade, Alexander Moa, CINDE president Jose Rossi and CINDE director Gabriela Llobet. Each of them have a strong interest in keeping Intel happy — the technology giant constitutes 20% of the country’s exports.

But that wasn’t all the good news that the President had to impart: Monday, Internet software company MVware in Pavas, the western suburb of San Jose, was increasing its operation from 250 to 400 workers by 2015. Many had feared that Intel’s move would cause companies to avoid expanding operations here or in settling in this country.

QCOSTARICA - The week of June 13 to 19 registered a decrease in the average number of deaths due to Covid-19, when 20 daily...
Nicaragua

QCOSTARICA - The pandemic caused by Covid-19 fuels the strategy of positioning Costa Rica as a world destination to develop wellness tourism, since travelers...
Banking